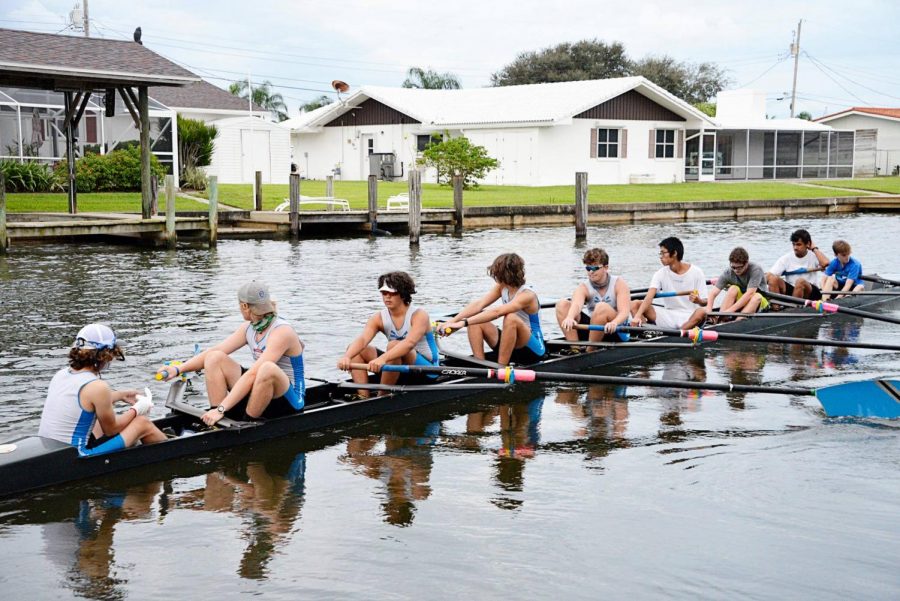 Space Coast Crew’s first non-practice event, originally set for Oct. 3 against Sebastian Rowing, was scrubbed and replaced with an internal scrimmage at Oars and Paddles Park after some unexpected impediments came up before race day, according to Bryan Little, head coach and director or rowing at SCC.

“There was a lack of waivers and liability insurance. Just the forms did not get completed in time,” Little said. “Just some hurdles were up right in front of us really quickly. We made the best of what it was, and it ended up being really fun on Saturday.”

“I was pretty disappointed, considering this was like supposed to be the first race of the year,” Scott said. “It’s not the same competing against the boats on your team. Because like with the women I know that, usually, the [varsity eight] can beat the [second varsity], but I was wondering how that would compare to like another team’s [varsity eight].”

The change of plans also led to an altered racing structure.

“It’s equivalent to, if you ever watch a time trial from like a bike race or a running race, it’s a time trial system,” Little said. “I tried to spread [the launches] out about every 30 seconds. So we went from the slowest boat to the fastest boat, so that the boats were passing each other, pushing each other.”

Not only was the event changed from a head-to-head race into an internal time trial, but the rowers at SCC also ran five kilometers after racing, a feat which Little said he is incredibly proud of.

“I think what they found is that they are mentally a lot stronger than they give themselves credit for,” Little said. “ To be able to go race a 5K at a high level, push yourself, and do really well at that, and then come back in maybe another 20, 30 minutes later and go for another 5K run, and push yourself, you know that’s extraordinary mental [toughness].”

Little commended the rowers at SCC for their performance and said that he believes his rowers will continue to improve.

Scott said she also believes the rowers at SCC performed well, despite the sudden change in the race’s organization and competitors.

“I was like, pretty proud of how we did work together as a boat, and I feel like all the boats did really well,” she said. “I think in my boat, we kept up the press for the whole race. That was pretty good as well. We were keeping a time, just generally rowing pretty well together.”

Coach Little said he is trying to organize more races against other clubs and teams.

“We have the ability now to race again on Oct. 31 down at [Canal] 54, and that one should happen because all the insurance stuff should be good,” Little said. “It looks like there’s a small chance that we might actually go to a real race in November, which would be extremely great because we’ll see the best competition that we can see all fall.”

Little continues to work on making the Nov. 21 race a reality.

“There’s a small chance, and I’m working on making it happen,” he said. “I have to create a lot of protocols, I have to make sure it’s safe for our team. I’m deliberating that, and then I’ve got get it approved by the board. But I think if we actually go to this race there’s the possibility of actually having some really great competition, some of the best in the state, and that would be super-exciting.”

Little said he wants his rowers to continue to improve in the meantime.

“There’s always things to improve on to be honest,” he said. “I mean technique-wise, we can always improve on that; fitness, we can always improve on that, and being the first [race], execution was really [good], but we could do [even] better, and I think when we have actual competition, what’s gonna end up happening is — are they going to focus internally? I want them to learn how to internally focus. I want them to make sure they have their head inside their boat and focus on only what they can control. You can’t control the results, how the race goes, but you can control your effort, how much you practice, and, in the end, we’re gonna be a much better team if we only stress about what we can control.”