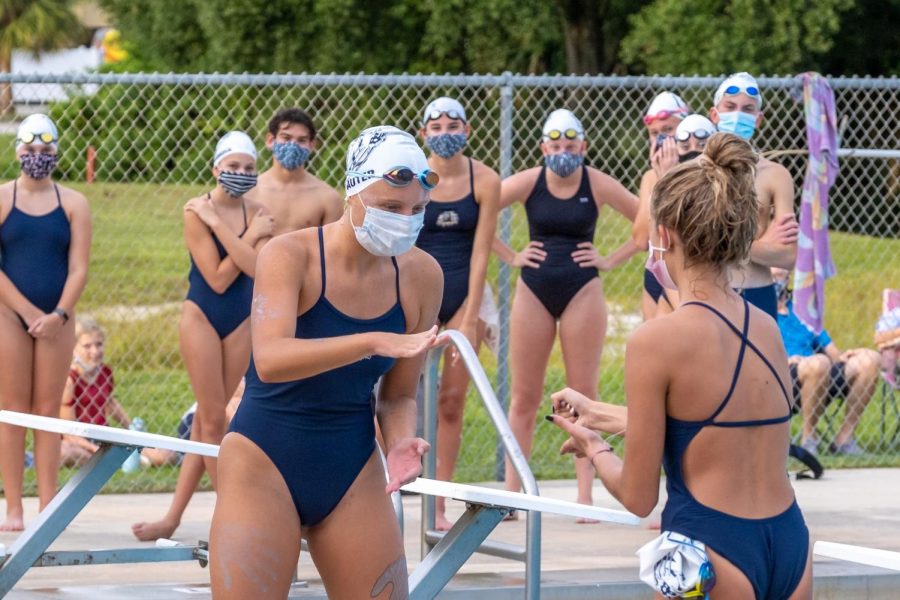 Layla Auter (12) faces off against Lillian L. (8) in a Rock-Paper-Scissors match.

Swimmers were pitted against one another in a battle of blue versus silver. The meet took place on Oct. 16 at the Fee Avenue Pool following the end of dual meet season. The silver team defeated the blue team 128-126.

“Going into the meet, we knew it was going to be pretty evenly matched because the coaches made the lineup pretty matched,” team captain Layla Auter (12) said.

The team captains also had a say in the lineups.

“That was especially pretty interesting [for the captains] who were in charge of each team, trying to make the lineup for each team and knowing who’s on the other team and trying to guess what the other captains were going to put them in, trying to get the best points,” Auteur said.

Coach Kyle Berry separated the fastest swimmers between the teams to ensure that they were created as fairly as possible, according to senior and team captain Logan Ehlers.

Because the meet was mainly for fun, Berry added some twists, according to Auter.  For the second 50 yards of each swimmers’ leg of the 400 free relay, they had to grab a kick board and put it between their legs like a pull buoy (a piece of equipment used to support the hips and legs when swimming arms-only).

“It was definitely difficult because it’s a lot thinner than a pull buoy,” she said. “It looked kind of like shark fins on everyone, which was really funny.”

The swimmers got their game on with additional competitions before their races for a chance to win additional points for their team.

“The beginning of the meet was a little different. Because it was a more fun meet, and it was like a way to end the season, we started off the meet with a rock-paper-scissors tournament,” she said. “We were split up into silver and blue, and he said, ‘You need to find a partner on your silver team, do rock-paper-scissors, whoever loses has to follow you around and be your cheerleader. Then, you go find someone who won their tournament, and so on until you have someone who won overall for silver.”

Auter scored the extra points as the champion of the tournament. Team captain Chloe Pratt (11) said she believes this gave the silver team an unfair advantage.

Despite her team’s loss, Pratt said she still enjoyed the meet.

“It was a lot more fun than regular meets because we all got to like,  joke around together and you know, give each other a hard time about what we were swimming and everything,” she said.

Pratt said her times improved as a result of racing her own teammates.

“Since I was swimming with some of the people that I usually don’t swim with, it motivated me to push myself a little bit harder, and also because I was going against my friends, it also made me swim a little bit faster than normal,” she said.

Ehlers agreed that inter-team racing pushed him to perform better.

“I’d say we honestly had more motivation to beat each other just because it was more of a fun meet,” he said. “For me, the personal motivation was because my brother was on the other team, and I kind of just wanted to beat him.”

While the “blue and silver” meet wrapped up dual meet season, competition at the district level will take place at the Cocoa Beach Aquatic Center Wednesday. Spectators are not permitted as a COVID precaution. The meet will follow similar guidelines to the AAU Junior Olympics, according to Auter.

“If you weren’t swimming, you were to wait outside of the pool deck … and you could only enter the pool deck if your heat was up next,” Auter said. “It was very organized, straightforward, but it also dragged out the meet a little longer than normal.”

“I just think that it was a really fun way to end our dual meet season, and a fun way for all of us to come together as a team right before Districts, so that we can have a stronger bond for the end of the season, and hopefully it will carry over into future seasons, too,” Pratt said.