Zoom and gloom: the pros and cons of E-Learning 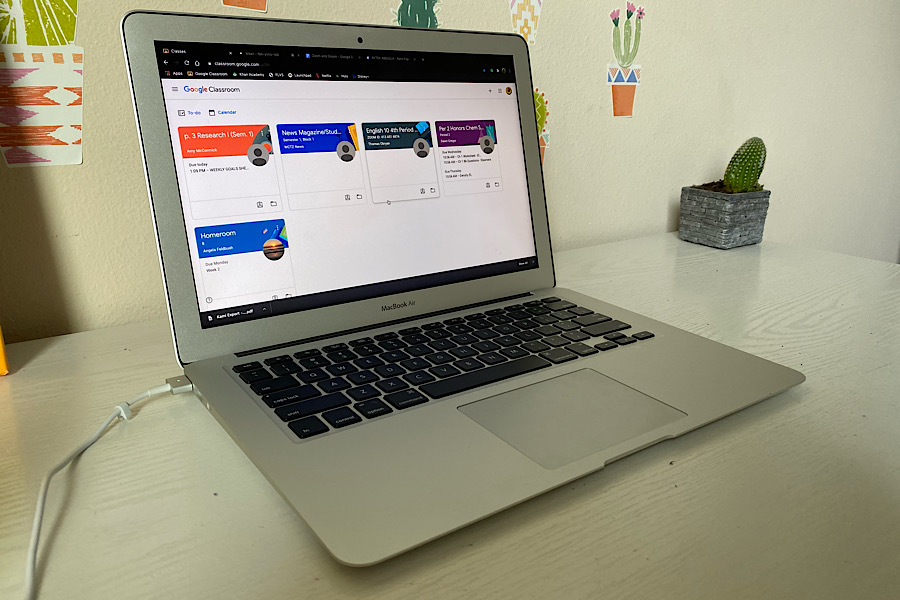 Students from all corners of the county begin the day by sleeping an hour later than usual. It’s a welcome change to last year’s hectic mornings filled with the panic and stress of getting to school on time. For these students, “classrooms” are located a couple of feet away from their beds, so they no longer have to rush out of their doors. They gather their notebooks and turn on their computers in order to venture into the new and uncharted world of E-Learning.

In order to combat the COVID-19 pandemic, a new online system of instruction has emerged, where students engage and learn in classrooms through online calls. Students who chose this massive change in environment have reported several benefits and challenges.

“I don’t have to wake up early and I get to stay home and attend calls in my pajamas,” she said.

However, according to E-Learners, a handful of negatives also came with this new system of education.

“I feel like E-Learning is much harder than in-person learning because it is not as easy to interact with teachers and sometimes it’s hard to hear them,” Zhao said. “It is also much more distracting since I am in the comfort of my room instead of a classroom.”

Technical difficulties are a common issue among students during the class calls.

“Sometimes I can’t hear what the teacher is saying,” Laddunuri said. “Every time I’m on a Zoom call or Google meet it’s very glitchy and sometimes the audio cuts off so I can’t hear the teacher at all.”

Junior Allie Murray said she feels as if E-Learners are not prioritized by certain teachers and sometimes “forgotten.”

“Some of my teachers are not posting important information like test dates and such so we end up being blindsided when these things pop-up without knowledge,” Murray said. “Although I know that it is difficult adjusting to this new format, they  should be a little more understanding for those who won’t go in person for different reasons.”

“We are just left out and left to sit and watch,” he said. “It’s really hard to interact with the teacher because they also have to teach the in-person kids.”

“It’s harder to interact in class through E-Learning,” he said. “In-person, the teacher has the ability to gauge the class’s interest and to see if people look confused or distracted which is lost online. Also, the interaction that you have is lessened by the medium, making the class more of a lecture style. I feel like it is more present with in-person learning. There’s just something that’s lost communicating through screens and cameras versus face-to-face.”

But Gerhard said he believes that the issues that E-Learners are facing are largely due to teacher’s acclimating to the sudden change and that they certainly won’t be permanent.

“I think lots of the problems are just growing pains with teachers learning to teach in a new way,” he said. “I hope that over time the experience will improve.”