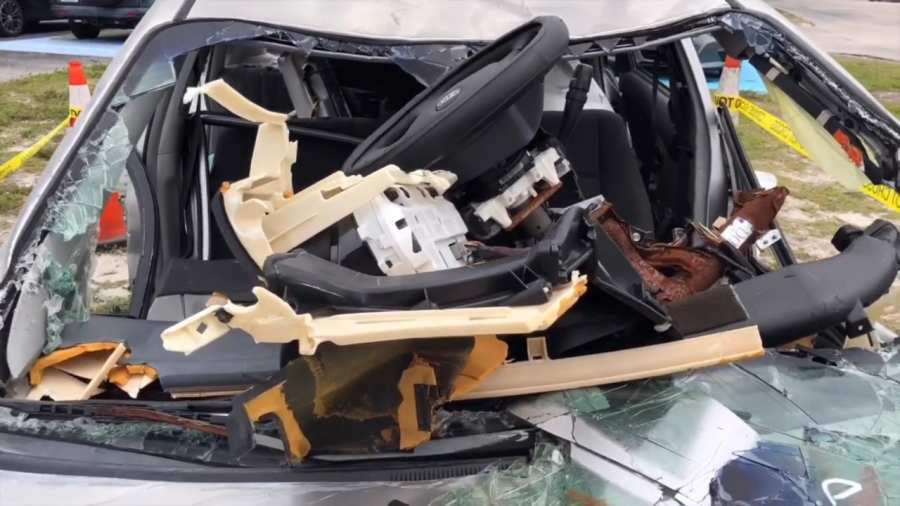 A totaled car has been placed in the student parking to display the results of drinking and driving.

A wrecked car from a DUI accident that resulted in two fatalities has been placed in the student parking lot for the week in hopes of warning students about the dangers of drunken driving before Prom.

“We have historically had some issues with Homecoming and Prom because of alcohol,” School Resource Officer Valerie Butler said. “We were trying to think of a creative way to bring awareness to the dangers of drinking and driving, so we came up with this idea.”

Butler said she thinks this idea will be more effective than others.

“I’ve seen it done in other schools,” she said. “I thought that reaching out to one of the wreaking companies that could provide us a vehicle from an actual DUI fatality would be pretty impactful.”

A local company provided the car voluntarily and did not charge the school any money. The car had to be brought on a flatbed tow truck and will remain in the parking lot through Friday.

“It was quite the challenge to get [the car] positioned to where we wanted it to be,” Butler said.

Junior Eva Keenan said she was shocked when she was leaving the school parking lot Tuesday afternoon.

“Everyone pulling out of school was confused and going around asking what had happened,” she said. “The wrecked car was surrounded in crime scene tape, but I figured that an accident that bad couldn’t happen in a parking lot. I think this is a good idea, and it will scare kids from drinking before Prom because it shows them what could happen.”

Prom will be held Saturday at the Viera Holiday Inn.