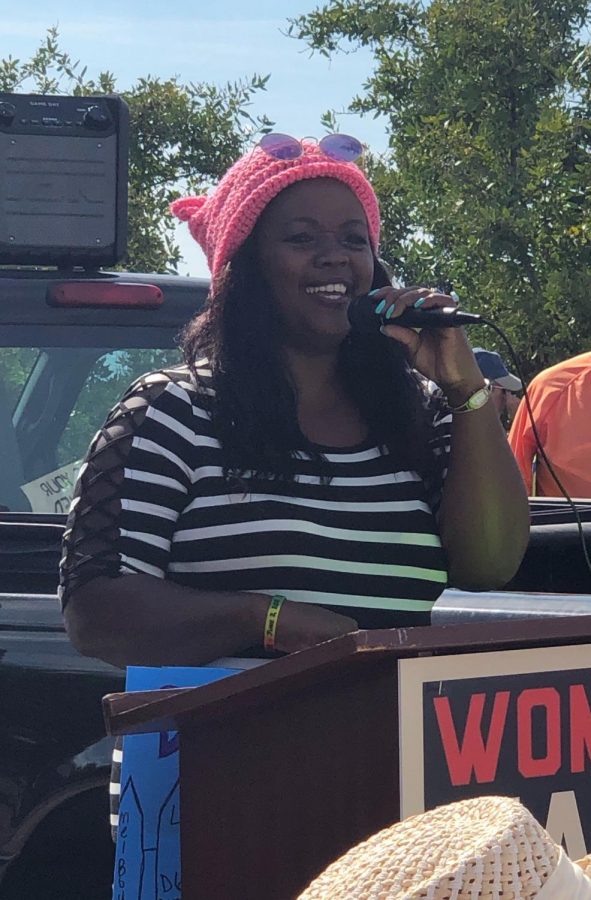 Americans across the country shared their voices and activism with the world by participating in the third annual Eau Gallie Women’s March on Saturday Jan. 19.

A local march was held at the Eau Gallie causeway from 12 p.m. to 2 p.m. Other marches took place in other cities, counties and states to support women’s rights and stand against domestic violence and sexual abuse. Brevard County resident Kathy Smith has organized the event for the past three years.

“Now that we have social media we can create an event and start engaging with people that you don’t even know, and it doesn’t even matter,” she said. “It just becomes a community effort. It’s not like I have the weight of organizing on my shoulders.”

In 2016 the first national Women’s March took place in Washington D.C., with other marches taking place around the world. Smith decided to start a march for Brevard County residents that year. She created an event on Facebook and within four days about 1,200 people had RSVP’d. In the end, about 3,000 people showed up to the Eau Gallie march.

“It’s a really cool feeling when you get all of it together,” Smith said. “People are like-minded and it’s positive.”

On Saturday members of the community gave speeches at the Front Street boat ramp by the causeway before the march began. A surprise guest speaker, Jeannine Lee Lake, arrived to the march to share her own thoughts and insight on issues our world faces. Lake ran for Congress as Indiana’s District 6 state representative in the 2018 election on Nov. 6. She has lived in Muncie, Indiana for about 30 years and worked as a news reporter for USA Today during that time. Lake has been in town since Jan. 5 to assist her father in recovering from a broken hip. Because she was unable to attend the Women’s March in Indiana, Lake came to the Eau Gallie march.

“As a wife and a mother if I didn’t stand up for what I believe in, what kind of mother would I be for my kids?” Lake said. “We are women and we are fierce.”

According to her website Lake ran for Congress because she believes “we all have to stand up right now and fight for progress – for our prosperity and health, our civil rights and civil liberties and our security.” Lake said she chose to run despite not being a politician prior to the election.

“I was scared,” Lake said. “I didn’t know how to run as a politician. I wanted to speak out against things that bother me, and support the things that I care about. I am fed up and fierce, and sick of the status quo.”

Lake won her district’s primary election against five other Democratic candidates, and lost in the general election to Republican Greg Pence, brother to current Vice President, Mike Pence. Lake said that she plans to run for Congress again in 2020.

“I’m studying as many issues and topics as possible to prepare for the upcoming Congressional race,” Lake said. “I’m excited about reaching more people on the campaign trail and getting them involved in the process. I really enjoy meeting people and serving others. I have a passion for service – it’s my fuel.”

Sixteen-year-old Julie Adams, a junior at Rockledge High School, also gave a speech at the march.

“My friend put me in contact with Kathy Smith and asked me to speak in her place,” Adams said. “I chose to focus on youth activism because in 2019 it’s easy for young people to feel like they don’t have a voice.”

Adams spoke of youth empowerment and addressed her belief that anyone can make their voices heard, no matter what their age is. Her speech quoted Shirley Chisholm – the first black woman elected into Congress in 1968 – who said, “If they don’t give you a seat at the table, bring a folding chair.”

“I couldn’t sit still and not do my part to fight for justice,” Adams said. “That seems cheesy, I know. It seems like all adults in the world have abdicated their responsibilities, so if they won’t address these problems, I will.”

Adams said she plans to join the College of Democrats in whatever school she attends, and looks to continue working on campaigns and one day run for office herself on a progressive platform.

In regards to her experience at Saturday’s Women’s March, Adams said she felt proud of her community, proud to stand with other strong women and happy to see young people getting involved and trying to change the world.

”I believe the issue of women’s equality to be an important one and that I need to do my part to speak up about all the issues women face today,” Adams said. “Never underestimate women. Listen to the people you represent. Hold your elected officials accountable.”

“We can’t shut our eyes to what is wrong,” Woods’s girlfriend, Denise said. “[What’s wrong] does matter.”

People of all ages attended the march, including nine-year-old Peyton G.  She stood on the sidewalk with signs containing messages such as “Love not hate” and “Stop bullying.”

“I like holding up signs,” Peyton said. “People honk and wave at me as they drive by.”

Activists such as Smith, Lake and Adams hope to instill motivation in others to make their own change.

Recent years have given rise to movements such as “Me Too”, “Time’s Up”, “Never Again” and “Black Lives Matter”. These movements express a desire for change regarding issues such as women’s rights, gun safety and police brutality. Recent elections have brought people such as Smith, Lake and Adams to their feet as they campaign for government officials who will work to bring about the change that they wish to see.

“It’s starting to make a difference and people are starting to get elected into office,” Smith said. “You can see that changes are happening.”

“If you do nothing else, vote,” Adams said.

Smith, Adams and Lake hope to empower youth to take a step toward making a difference in the world.

“Be brave and don’t let anything or anyone stop you from pursuing your dreams,” Lake said. “Least of all yourself. The unknown is scary, but not challenging yourself to do something new is even worse.”