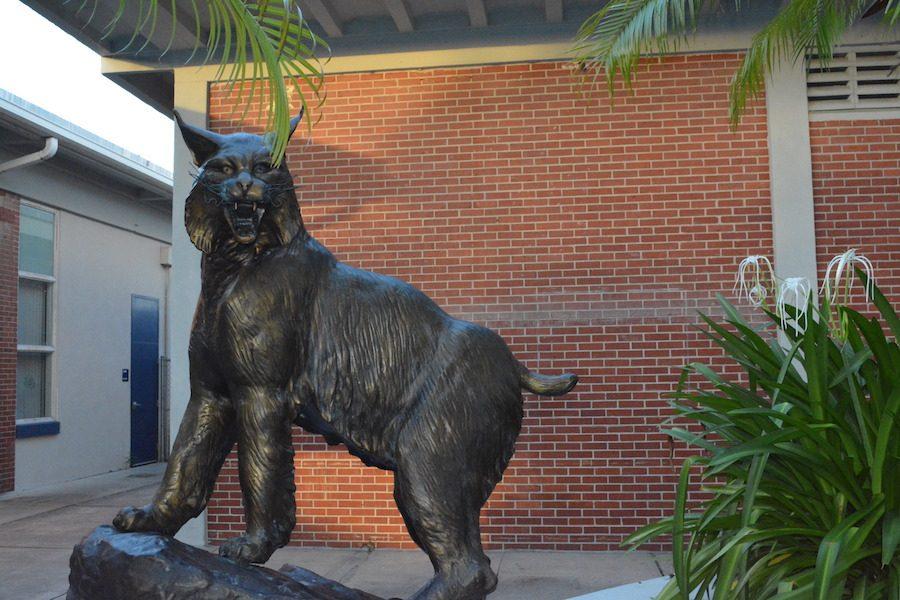 Whitworth the Wildcat stands tall with teeth bared as he embraces his new home.

The name “Whitworth” has prevailed after a fierce online survey battle to identify the school’s newly installed bronze wildcat statue. For the first time in the five-plus years of westshoreroar.com surveys, nearly 2,000 participants cast their votes. Whitworth received 1,239 votes, followed by Wesley with 668, Wiley with 20 and William with 9.

The new name will serve as a reminder of the school’s former physical education teacher and cross-country coach Jason Whitworth, who passed away in June after battling Amyotrophic lateral sclerosis. The progressive disease, often referred to as Lou Gehrig’s Disease, affects nerve cells in the brain and the spinal cord of the afflicted.

“I am overjoyed that the statue is going to be a tribute to Coach Whitworth,” 2016 graduate Hannah Montgomery said. “This will certainly help to leave a lasting legacy in the school like the lasting memory he left in all of our hearts. He was an incredible coach, teacher and person. He always went out of his way to be kind and help others.”

Math teacher and 2016 class sponsor Jill Whitacre already has ordered a plaque bearing the “Whitworth” name to be installed near the statue.

Coach Whitworth also has been remembered on the West Shore Class of 2016 Facebook page, which details the impact he made as a teacher.

“My dad would be proud of the statue,” junior Alexis Whitworth said. “He really loved West Shore and all of his students.”

With a newly constructed pedestal and palm trees surrounding this symbol of school pride the statue — donated by the 2015 and 2016 senior classes — the bronze wildcat made its official debut in the commons area on Sept. 23 during Spirit Week.

Gracie Parish, who graduated in May, said she’s pleased with the new campus icon.

“I definitely think that purchasing the statue was a good way to leave our mark as a class on the school,” Parish said. “I personally loved the idea from the beginning, so seeing it followed through to its unveiling was really satisfying.”