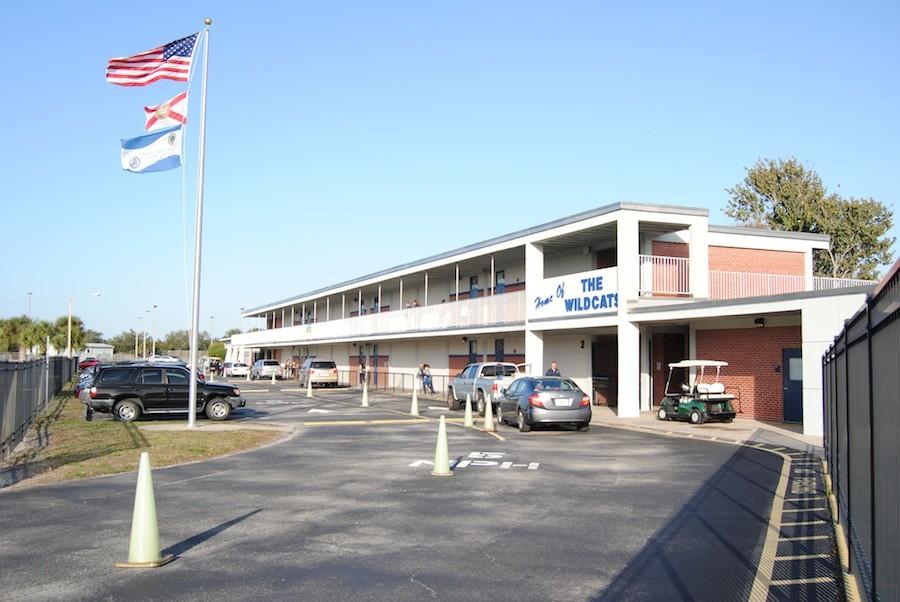 Parents drop of their students before school in the car loop on the south side of campus.

With a court house across the street, noisy trains passing by every few hours and student pilots circling above, West Shore students often must overcome distractions not experienced on other Brevard County campuses. But sophomores Hannah Harris and Taylor Donovan say they’re more concerned with potential dangers than distractions.

“No one knows who is at the court house when we are in school,” Harris said. “We don’t know why they are there, and who knows what would happen if something dangerous happened over there during school hours.”

Donovan pointed to the inexperienced pilots who fly over the school each day.

“Even though I am aware that the student pilots are accompanied by instructors, it can still be unsettling at times knowing that they are flying overhead,” Donovan said. “I sometimes wonder how we would be affected if someone were to lose control of a plane.

But added that chances of disaster are unlikely given the campus hasn’t experienced an incident since the original school opened in 1957.

“I do believe that our location can possibly evoke dangerous situations,” Harris said. “However, I know the chances of something happening and the student body being in danger is slim.”

Donovan said she’s confident the rest of the student population would be safe in case of an emergency.

“I trust our administration, and if something ever were to happen I believe that the adults would be ready to take action,” Donovan said.

With trains running past our school, the problem is not possible danger, but distraction within the classrooms.

“When the trains pass by occasionally the classroom starts to vibrate,” eighth-grader Bella S. said. “However, the worst part of the trains are the noises they make, and occasionally it is loud enough that I can’t hear my teacher clearly.”

In the next couple of years, trains administrated by the newly constructed project, All-Aboard Florida, will pass by our school 32 times a day.

“I am not looking forward to when the project is completed,” Donovan said, “the trains are going to be a huge distraction.”