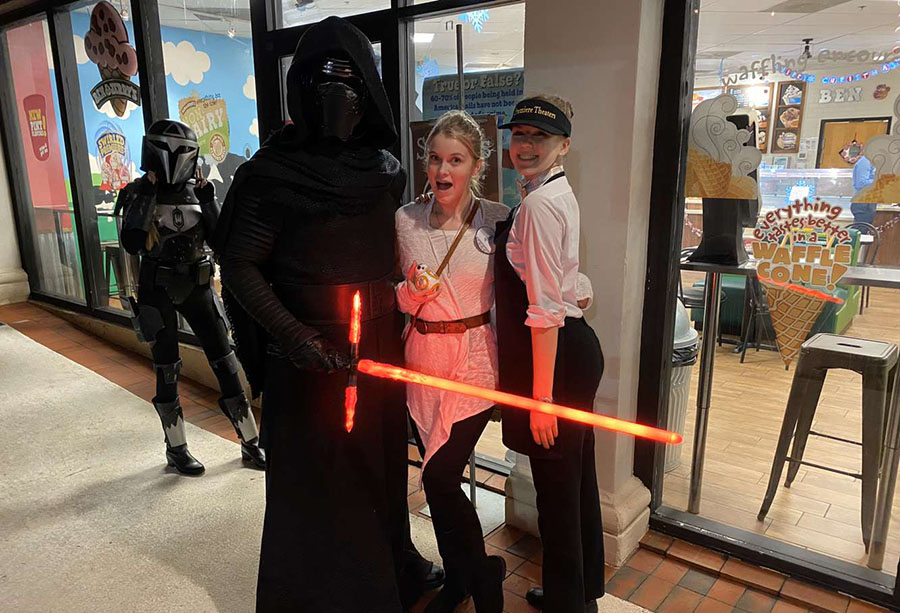 Going to a school with a heavy workload, babysitting, tutoring, participating in school sports, and being part of multiple clubs is a lot for a 17-year-old student to handle, but sophomore Sophia Bailly (10) manages to do it all and still find spots in her packed schedule to work part-time at The Premier Oaks movie theater.

“My older sister worked there when she was in high school,” Bailly said. “She loved working there — especially because we’ve grown up in a family of movie-lovers. I wanted to start making money to save up for college and a car, plus I thought the job would give me good life experience.”

According to Bailly’s coworker Lexi Vander (12),  Bailly must have been an easy pick for the job.

“She’s very articulate and has great grades and lots of extracurriculars which is important for a customer-service job because it shows that she’s social,” Vander said.

Even though her credentials were plenty to get her hired, it was important to Bailly that her first few shifts went well to make a good impression.

“My first official shift was on “Avengers: Endgame” opening night, and that was the busiest night the theater ever had,” Bailly said. “My manager thought that I wouldn’t want to come back after that. The concession stand looked like a war zone by the end of the night.”

A first job can be stressful or overwhelming for some people, but Bailly found working at the theater exciting. She was happy that while gaining experience from her new job, she was also able to meet new people and get to know her classmates better.

“Working with other West Shore students definitely makes the job more enjoyable because you know more people,” Bailly said. “When I first started working there it was nice because I knew Sabrina [Torres (12)] and Jade [Norton (12)]. But at the same time, it’s nice to work with people from other schools and also college because you build close friendships. It becomes a little family.”

Bailly said at first she was nervous about how she would fit in on the job.

“Sophia is super-responsible and does everything she’s told to do without hesitation and she does it really well,” Vander said. “She’s a really hard worker and since she’s such a nice person she gets along with all of our coworkers and all of the customers with no issues.”

But even ideal employees can make mistakes sometimes.

“I almost flooded the ice room when I went in for orientation,” Bailly said. “They sent me back to get ice, and after I had filled the entire trash can-sized bucket with ice, I tipped it over and ice was everywhere. My manager that night couldn’t stop laughing. He told me that he did the same thing when he was an employee.”

As with any job, working at a theater has its downsides.

“I don’t love that people leave all their trash in the theater instead of taking it to the trash can but that’s part of the job,” Torres said.

Bailly said those negative aspects of the job are worth dealing in light of the fun events she gets to participate in as an employee.

“There were beach days last summer, a Christmas party in December, and we went to Tank America for military-type lazer tag,” Bailly said. “That’s definitely the most fun because one of my managers got into it. There was one time my coworker and I won the game with two seconds left against one of our managers.”

And some of that fun occurs at the theater.

“There are little toys that we find in theaters mostly — like happy meal toys — and we have a skeleton one that we hide around and when you find it you’re supposed to hide it again, which is a fun little thing we do,” Torres said.