Teacher’s hobby proves to be sweet as honey 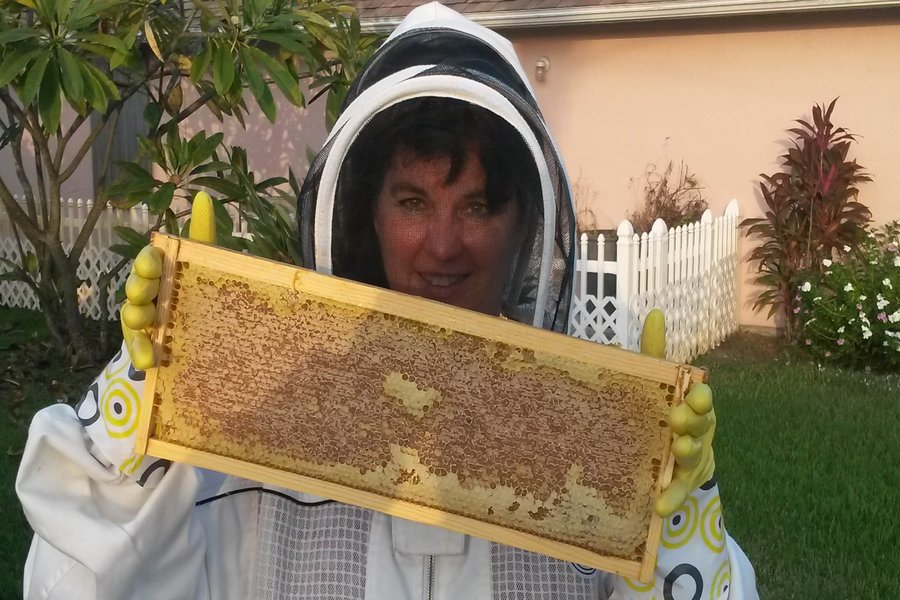 History teacher Athena Pietrzak can often be found telling colorful stories to enraptured classes of middle-school students, but find her outside of the classroom and you’re likely to see her pursuing an entirely different passion: beekeeping.

“The idea behind it is not just for honey, it’s that bees pollinate over one-third of the world’s food,” Pietrzak said. “It’s obvious, when you look at it like that, how important bees are.”

Pietrzak believes her first encounter with bees was a lucky accident.

“I was first interested in bees about four years ago,” she said. “I was an elementary school teacher, and I saw this program in Savannah that would put a live hive — for observation — in a classroom. I decided immediately that I wanted one. The school district saw a problem with it though, and even though bees rarely actually sting if they’re treated right, they shut the idea down.”

Pietrzak didn’t let the refusal discourage her, though.

“The next best thing was for me to create my own [hives] at home. I have three — faith, hope and charity — all in my backyard.” Pietrzak said. “I got them and filmed myself so that the kids could learn at home.”

She believes in giving her bees the highest quality of care.

“Obviously they’re not happy with it when you’re pulling pieces out to inspect it,” Pietrzak said. “I’ve been stung about 25 times, but I’ve just accepted that it’s a fact of life that I’ll have to deal with. I’m a little crazy with it, though. I beam classical music out into the backyard, I put Christmas lights underneath them, I talk to them. I like to put different flowers around them. You do as many things as you can do to make sure that they’re happy and comfortable and in a positive environment.”

According to some students, Pieterzak’s caring qualities can be seen beyond beekeeping.

“It’s obvious how much she loves her students,” Taelyn Tolle (9) said. “She’s got signs hanging on the walls that are bee-related. She’s always giving us good advice. She’s definitely one of the best teachers I’ve had at West Shore, and even that I’ve ever had. Something about her just always makes you feel heard, and cared for, and she’s really trying to make a positive impact on the kids she’s teaching.”

Pietrzak said her hobby is a natural fit.

“I really think that beekeeping is just something that’s inside of me as a teacher,” she said. “I feel like not only do I teach history, but also beekeeping, and the world, and how to be a good citizen, and the things that you can push forward to the people around you. I tell my students when they’re leaving every day, ‘be kind, be sweet.’ And I really mean that.”

She said beekeeping even helps with her teaching.

“My students definitely understand me better when I talk about it because they know where I’m coming from,” Pietrzak said. “I always try to do good in the world and present myself in a positive nature, and I urge them to do the same. I feel that it makes a difference to see someone telling them that who’s also doing it through their actions, not just preaching to others about what’s good and right.”

The devotion to empathy and care extends bees.

“I’m always trying to do stuff like this,” Pietrzak said. “When I was raising my kids, we raised and trained seven guide dogs for the blind. It’s another one of those pay-it-forward things. I try to teach the kids what’s best in life and how to put that to its best use.”

Pietrzak took up beekeeping to made a contribution to helping a species crucial to the sustainability of the earth. She became a teacher for a similar reason: helping students.

“I think teaching was definitely something that was right for me,” she said. “It’s a way for me to foster care and love and empathy with kids, even if I only have them for a year. I see such potential in all of them, and I know that every student that comes through my doors could go on to do good for our Earth, just like the bees. I see it as my responsibility to help them reach that potential and be the best they can be.”