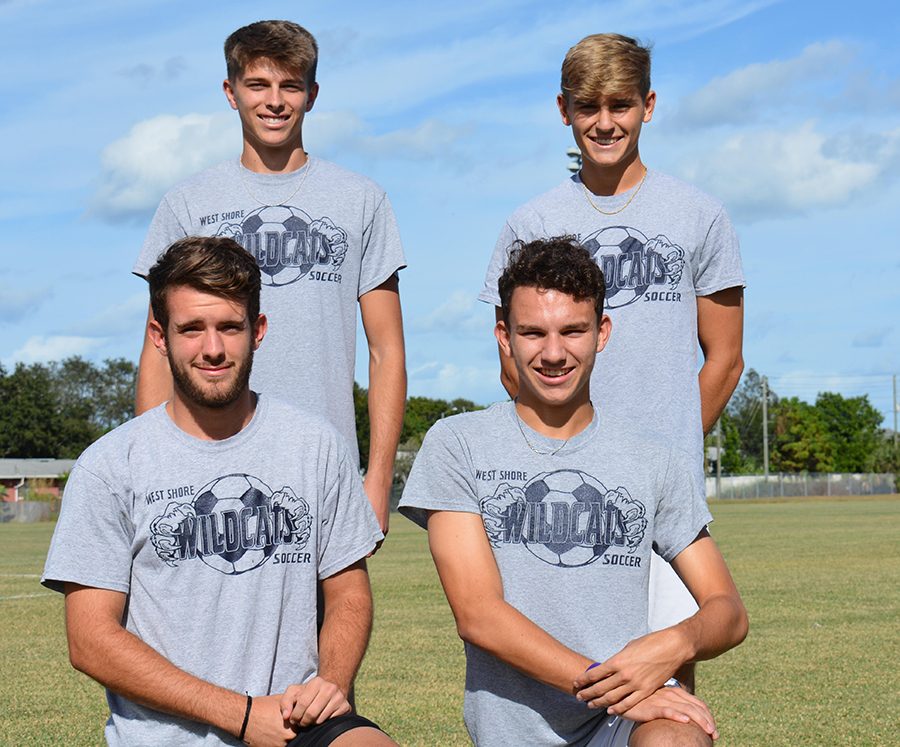 The year is 2010. This Saturday morning, two premier U10 soccer teams — Melbourne Beach Tsunami and the Indian Harbour Beach Three Lions —  face off. Before the game begins, Tsunami midfielders, 9-year-olds Ian Leighton and Cameron Yeutter, begin trash talking with the Three Lions Midfielders, Collin Robidoux and Chase Hester. The high-emotion game that follows results in a 4-4 tie with Robidoux scoring a penalty kick and Leighton scoring on a free kick. The animosity with which the four boys treat each other develops into mutual respect as they recognize each others athletic ability.

Fast-forward six years. The four boys, this time united under one jersey, huddle together with tears in their eyes as they hold up the Florida High School Sports Association Class 2A Soccer State Championship trophy.

Seniors Robidoux, Leighton, Yeutter and Hester possess a friendship that has stood the test of time. From elementary school travel leagues to high school varsity success, the four boys have pushed each other to their full potential in the sport that they love. With each of them possessing exceptional athletic talent and hardened competitive mindsets, it’s no wonder the four found solidarity.

“I like soccer because I just like beating other people,” Yeutter said. “I’m very competitive. After we beat someone it’s like ‘I hate you guys, like that was a good game, but we just destroyed you.’ It’s a very competitive sport for me and I like that aspect of the game.”

Like Yeutter, Hester found interest in the sport as a form of competition.

“I’ve been good at [soccer] since I was young and I love being better than my opposing team,” Hester said. “When I was younger I also had to play baseball, but I was better at soccer, so my dad finally let me out of baseball, which was nice.”

Robidoux, on the other hand, initially became interested in the sport because of family tradition.

“My older brother played and my

“My dad played too when he was a kid and in college, so it was just in the family,” Robidoux said.

“My brother has always been into soccer and my dad played soccer in college,” Leighton said. “ He didn’t force it upon us, but he started us really young and we’ve been playing since we were four.”

The four started on opposing teams in elementary school, but after facing each other multiple times, realized that combining their talents would make for a more productive travel soccer experience.

“I met Cameron and Chase at Ocean Breeze [Elementary], and then we started playing club soccer together,” Robidoux said. “Chase and I were on one team and Ian and Cameron were on another. Probably a year or two after that we all went to [Melbourne Beach] Tsunami because we tired of the rivalry of playing against each other and realized if we just played together it would be almost unstoppable against other teams.”

West Shore wasn’t known for its athletic programs at the time due to its high academic rigor. The four boys still applied to the school together because they believed that if all four of them were to get in, being able to play together would outweigh the additional schoolwork.

“Literally the only reason we applied here is so we can all play soccer together,”

Yeutter said. “I wouldn’t want to be here for any other reason than to play soccer. At West Shore we have the drive to out class our opponents.”

“[They have] a unique chemistry on the field together,” Robert Robidoux said. “With each of them knowing the others styles and habits, the chemistry comes naturally to them. Knowing where each other will be on the field, covering and supporting each other and their

communication.  Sometimes I think they know what each other will do before the player actually knows himself.”

After winning the 2017 state title, the boys found validation with their decision to play together through high school.

“It was the best thing ever,” Leighton said. “I literally got chills, some tears came down after the game, but it was all good. It was mostly joy, a little bit of relief. It was definitely all worth it.”

According to coach Robidoux, the boys have set the standard of excellence for future players.

“During their time with the soccer program, they have anchored the program to three district titles, three Regional Championships, three Final Four appearances and a State Championship in 2017,” he said. “I have really enjoyed being a part of their growth.”