Senior brings his art to ‘Minecraft’ 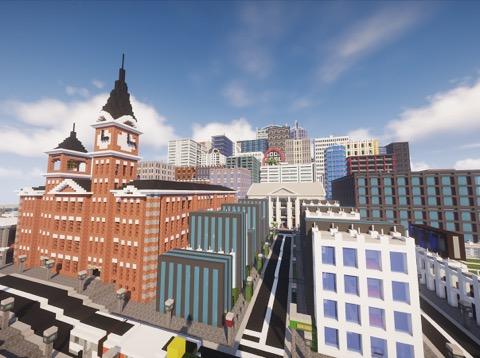 Not many people can say they’ve taken their art to the next level by building a full city in “Minecraft,” the perennially popular video game, but Michael Liamkin (12) can.

Liamkin has put a great deal of dedication into his city.

“I’ve been building the city for a couple years,” he said. “I feel that it helps express creativity because you’re building different structures and using a lot of different building styles. I’ve got some really nice shaders on some of the buildings. It looks realistic. I mean it’s blocky, but it looks like it’s real. It’s a modern city with a bunch of districts like a commercial district with skyscrapers and businesses and then a more residential district and we’ve got airports. It’s all on a server and people help each other.”

“It’s very fun to play multiplayer video games and talking over voice chat,” he said. “Having that companionship working as a team on something like a video game is like team building.

“When we’re just talking to each other we’re usually playing video games,” he said.

Hubbard said he has an appreciation for Liamkin’s talent.

“He’s shown me the city he built,” he said. “Honestly, it’s extremely impressive. We spent an hour seeing his city that he’s built and even then I’d only seen a part of it.”

“As someone who is not that good at building, and doesn’t play a lot of ‘Minecraft,’ it’s pretty amazing to see because I could never do that,” he said. “I mean the amount of time that must’ve taken him, it’s pretty insane.”