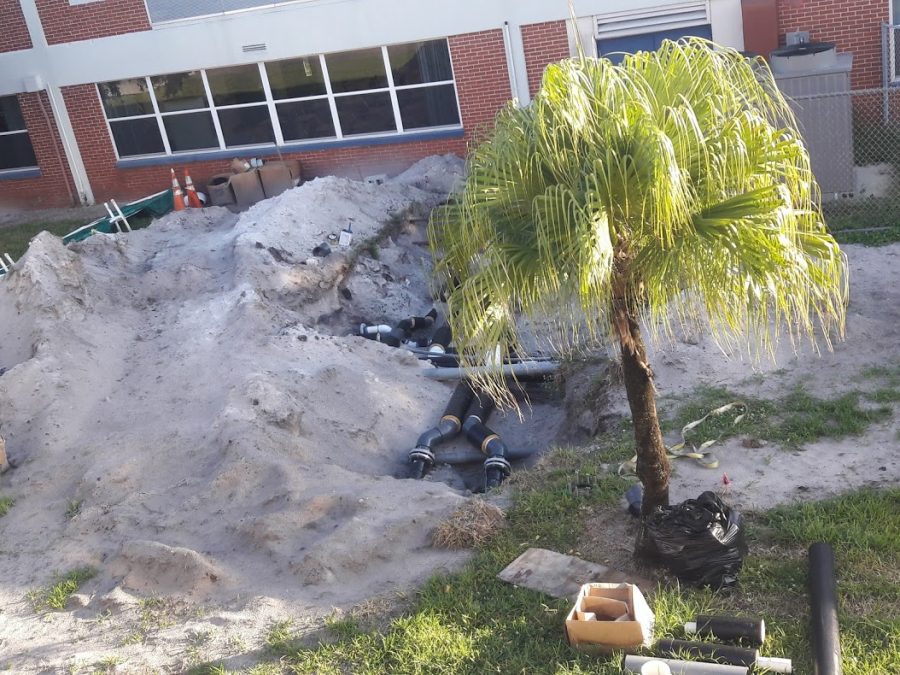 Soon-to-be-buried pipes on the north side of Building 3 show are part of the news air-conditioning system.

Outside the school’s front office hangs a plaque that reads “Eau Gallie Jr High School … constructed 1957” but what it does not say is that the school was built without an air-conditioning because such systems were not common six decades ago. And the AC units that were added decades later now need to be replaced.

“Our old [units], some of them are passed their useful life and they’re actually at the point of failure so we are nursing them along with parts,” Assistant Principal Catherine Halbuer said. “All the ones in [buildings] 2, 3, and 4 have been single units except for the downstairs of 3 and 4. They don’t even make the parts to repair those units anymore, so when something goes down sometimes it takes over six weeks for a machinist to actually manufacture that one part. The other thing is they are no longer energy efficient as well.”

Work on installing a new air-conditioning system began during the summer.

“This is a very complex process as you saw we had lots of holes in the ground, pipes sticking up. They actually drilled under buildings 3 and 4 this summer, did some directional boring,” Halbuer said.

Halbuer said the system will be operational in some building within the next two months.

“They anticipate half of the project being done at semester,” she said. “So Building 16, which is where the auditorium is, the locker rooms, the gym, and Building 6 will all be hooked up to the new system when we come back from Winter Break. Then they’re going to start doing all the piping stuff for buildings 2, 3 and 4.”

Halbuer said she hopes the installation will be completed by the end of next summer.

“Over second semester and then in the summer is when they’re going to be doing a lot of the demolition and the hook up,” she said. “So I hope to have everything to be done when you come back to school next year.”