Over time, senior emerges into spotlight 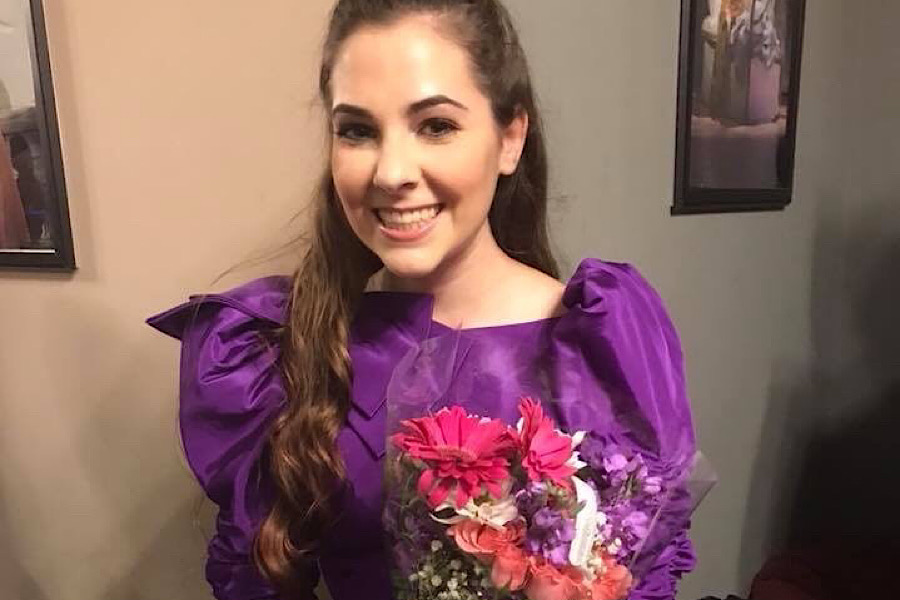 The stage lights suddenly return to their full intensity, brightening the dark auditorium and signaling the conclusion of the show. They illuminate the faces and smiles of the cast members. The audience, filled with proud relatives, friends and teachers, erupts in thunderous applause to congratulate the actors and actresses for completing yet another show. Gracie Moravecky, a senior and theater veteran, stands at the corner of the stage, grinning at the audience as they continue clapping. The fact that this is her second-to-last show and that she is getting increasingly closer to her final show before graduation, however, still looms in the air.

Moravecky has been involved in the school’s theater department  since she arrived on campus as a seventh-grader. She has performed in virtually every show available during her enrollment.

“I didn’t do two of them in middle school, mainly because I was really shy. Once I started doing them, though, I did every single one,” she said.

The leap Moravecky took into the thespian world left an imprint on her life forever. Her experiences in theater for the past six years and the influence they have had on her life is something that she surely will not forget anytime soon.

“Theater is pretty important to me because it’s where I met all my friends and where I grounded myself here,” she said. “It has really been life-changing, I would say. I don’t know where I would be if I had not joined theater. To me, the best things that came out of my theater career here were my friends and my newly-found sense of confidence and self. I was really shy before I joined theater. It definitely gave me an outlet to express myself.”

Those involved in the theater community say Moravecky has had a life-changing effect on them as well.

“Gracie is a great asset to the theater department,” theater teacher and director Maureen Fallon said. “She is very talented and has played a good variety of roles. She has graciously worked with middle-schoolers, even as a high-schooler. Gracie leaves a legacy of being a great team member, a hard worker, and a wonderful young woman. She has been an amazing dancer, singer, choreographer and actress throughout the years. Gracie is the kind of student you wish you had a million.”

Jade Norton (12), has been Moravecky’s friend since seventh grade.

“She is leaving behind a wonderful stage presence that showcased her variety of personas, such as being cute, quirky, silly and professional,” Norton said. “She can and has inspired people to continue doing theater even when the cast-list doesn’t encourage you to stay. Gracie and I have some of our best memories and moments shared with one another because of theater. I will forever be indebted to that because Gracie is my best friend and I cannot imagine my life without her.”

Throughout the years, Moravecky has given loads of help to the middle-schoolers involved in theater, specifically with choreography.

“She has definitely inspired me a lot when it comes to dancing,” Grant Newcomb (9) said. “She is just so talented and I admire her a lot for that. She is a great teacher for people who haven’t had much experience. Gracie can break things down well so people who are inexperienced can learn and eventually know what they are doing. She has greatly helped me improve my dance abilities and form.”

Graduation can be an emotional time for seniors, but for for students like Moravecky who have held long-time commitments during their time on campus, whether it be in sports, dance, theater or some other activity, the experience weighs heavier.

“What makes me most emotional is the realization that my final show here will be the last time that I’m performing with all my friends that I have made and have been performing with since seventh-grade,” she said. “The reminder that I am graduating and not going anywhere near where my friends are going also makes me emotional.”

Gracie plans to attend the University of South Florida and major in clinical nursing.

“Graduation is definitely sad to think about because I am not pursuing theater in college,” she said. “The show we are doing in March — “Anything Goes” — will definitely be my last one for good. It should be fun. I did get a part in that, so it should be a good way to end my theater career.”

Given the impact theater has had on her, Moravecky has advice for younger students who are entering the theater department and are experiencing the same process that she went through all those years ago.

“The most important thing is to stick with it,” she said. “A lot of people don’t get parts their first few times auditioning and then they get disappointed and discouraged, which leads to them dropping out of theater. I didn’t really start getting parts until last year, so that was like five years where I wasn’t getting anything. You have to pay your dues, as they say, and just keep going because you’ll eventually get your time to shine.”