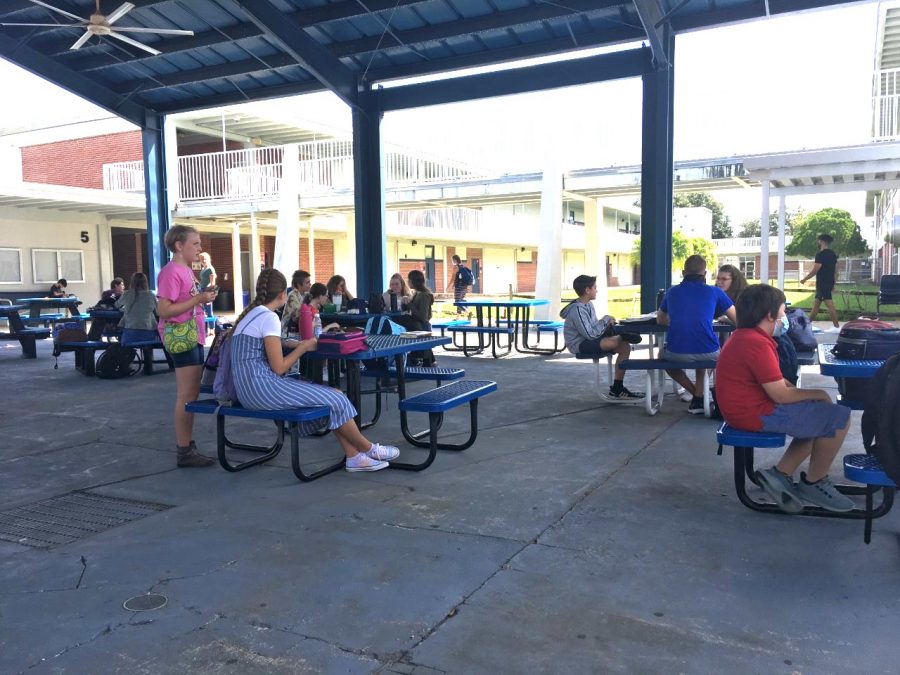 A handful of students shuffle into the empty cafeteria and take their seats at the separated tables. The image bears a vast contrast to the full, bustling cafeteria that they had seen in past years. As they sit down and scan the quiet cafeteria for familiar faces, their hearts fill with disappointment. When school reopened last week, many students came to the same bitter realization that they did not share lunch with their best friends and usual company.

To abide by COVID-19 protocols, the school transitioned from Power Hour, where students had the ability to eat with whomever they wanted, to three separate lunch groupings.

Designated lunch times are determined by who a student’s third-period teacher is reducing the opportunity to dine with friends.

“I’m not a fan of [lunch] because I don’t get to sit with many of my friends who have other lunches,” junior Dylan Fain said.

“It’s pretty dumb because it’s not actually accomplishing anything except separating friends,” she said. “That may be the point, but most people are still sitting with others and are not socially distanced.”

However, eighth-grader Mariam H. chooses to embrace the change with optimism.

“It’s actually really nice,” she said. “I like how there is much more space and it’s not overcrowded this year like it was in previous years. The lunch lines are also much shorter. In previous years I would have to wait in line for 10 to 15 minutes. Now, I just zip through the line. This change is also nice because everyone is socially distanced thanks to all the separate lunches.”

However, Mariam added that the administration should have separated the lunches in a different way.

“I just wish they had separated it by grade,” she said. “It would be way better because some people might not have the same lunches as their friends, causing them to be left out. There’s a lot of people that I see at lunch who eat by themselves because all their friends have different lunches. I think that if we did lunches based on grades, everyone could eat with their friends.”

Mariam wasn’t the only student who embraced this alternative.

“I don’t see why the school didn’t do it already,” senior Cale Butler said. “Half of my friends are already not at school, so I don’t see why they would take the other half away during the only time they can really hang out with them. Most people in the same grade are already exposed to each other in their classes, so separating the grades during lunch just exposes you to more people that you wouldn’t be exposed to normally.”

Another issue students have with the new lunch schedule is the timing. Because lunch is split into three intervals between 11:48 a.m. and 1:54 p.m., senior Savannah Hughes must learn to adjust.

“Lunch C is not the move,” she said. “I’m not used to eating so late in the day, and I don’t usually eat breakfast, so I end up starving by lunchtime.”

Assistant Principal Glenn Webb said safety, effectiveness, efficiency, movement of students on campus and DOH/CDC recommendations were all factors that played a role in designing the new lunch system.

“When looking at a change as drastic as moving away from Power Hour to a three-lunch model, it is important to look at the positive and negative consequences of the move,” Webb said. “Right now, doing everything we can to mitigate the dangers of large gatherings is not negotiable. While the benefits of Power Hour as a means of assisting students to develop self-learner skills and a mindset of individual responsibility, for the time being, we need to find other ways to work on those while we deal with this pandemic. It is a measure that we can take as a community, doing our part to keep ourselves and each other safe, and we owe it to ourselves, families and friends to take it seriously. I believe that the Power Hour model is invaluable, and look forward to moving back in that direction.”

While Webb agrees that students not being able to have lunch with their friends is a drawback, he believes that the good to come with his new change outweighs the bad.

“Unfortunately, the lunch schedule must be based on balancing numbers across three lunches,” Webb said. “I am not a fan of the term ‘social distancing,’ because in times like these, maintaining social interaction is very important. But, there are limitations to what we can do, and assigning lunches by students, rather than by teachers and buildings is not feasible.”