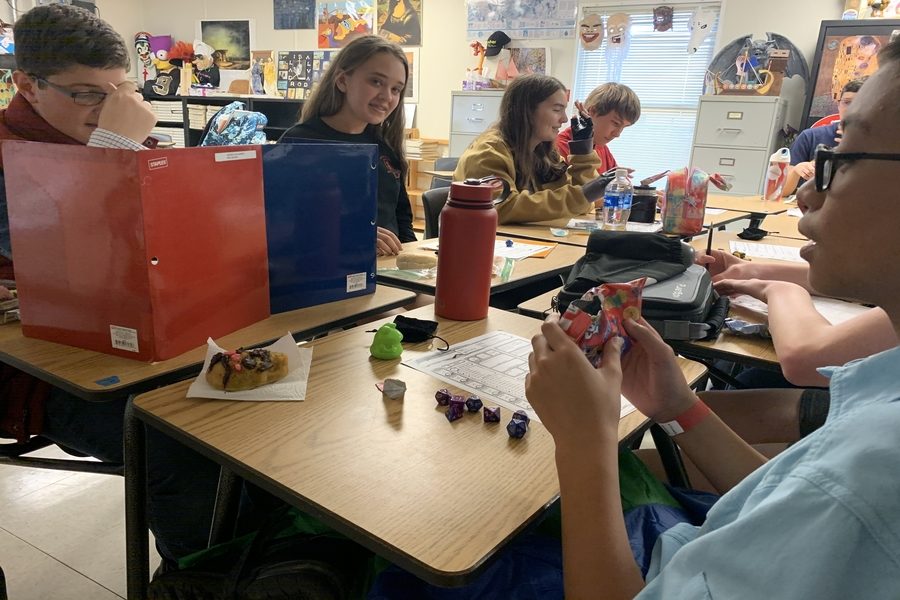 History teacher Chloe Radd has taken over sponsoring the middle school portion of the Dungeons and Dragons club, which meets during Power Hour on Mondays in Portable 8.

“I’m just supervising, but it’s really fun to listen to them, and fun to watch them interact with each other and use their imagination,” Radd said.

Deciding to sponsor the club was easy, according to Radd.

“I love D&D, I’ve been playing it for a long time,” she said. “One of my friends, her husband was a Dungeon Master, and they invited me in. I was like ‘hey, I have an imagination. I can do that’ and it was actually really fun. So I stuck with it, and I’ve been playing for a while now.”

Radd has hopes for the middle-school students she watches over.

“Especially since it’s middle school, I hope they stay together,” she said. “They have something in common that’s pretty special, and at such a young age. It’s a good group connection to have, especially with this school going up to 12th grade.”

She isn’t alone in helping middle school out, however.

“I [Dungeon Master] there too, with Diego Alvarez on Mondays,” high school club co-founder Matthew Krininger (9) said. “We want them to feel like they’re a part of this, and it’s not just high school and then they’re here too. When it’s only middle school, they felt kind of left out, but framing it as just a club split into two days makes them feel more included in everything that’s going on.”

“They definitely do more spontaneous things that you wouldn’t expect,” he said. “It’s actually really fun a lot of times, because you expect them to do one thing and then they do something completely different that you hadn’t even thought about. They’re really good at being positive if something bad happens, they just keep going.”

Radd has her own ideas for why the club has become so well-received by members.

“I’m wondering, you know, if some of their parents were into it,” she said. “So they’ve heard of it through them. There’s also a lot of games online, and even like board games, that I think start that idea for them. I think they’re having a great time, and I hope they keep going with it.