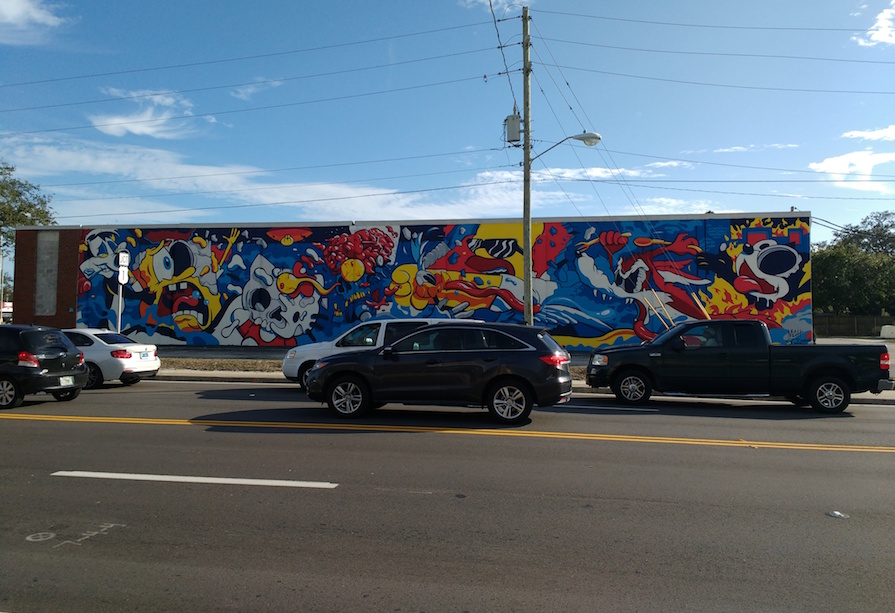 Homer Simpson punches the eyes out of a brain while Spongebob and Hello Kitty melt away to cracking bone.

Los Angeles artist Matt Gondek painted this mural on the side of the CrossFit Rise Above gym for the Anti-Gravity project to beautify the Eau Gallie Art District.

But some shop owners, such as Lisa Jaskulski from the furniture store directly in front of the mural, filed complaints against the graphic image.

“We don’t think they are worried about children. They don’t like the imagery themselves,” Packard said. “We have learned that most people are not artists and, therefore, want paintings of familiar things, such as dolphins and manatees.”

Packard said the Melbourne Historic and Architectural Review Board approved the mural despite controversy.

“We use murals to draw attention to our community, to bring art to the outside for people who may never step inside an art gallery,” Packard said.

“I wonder why it had to be so violent; I question that,” Finch said. “I mean what do you expect from an art district? If not there, then where can we do it?”

Senior artist Ashley Rivera said the mural is not as inappropriate as people say.

“[People disliking the violence] is ironic because that’s all that’s in American media,” Rivera said. “It depends on the interpretation.”

“It’s just as violent as something you’d see on a regular ‘Spongebob’ episode,” Weaver said. “It’s a statement on the violence in children’s cartoons and society, so parents are all up in arms because they’re finally being forced to acknowledge it.”

In 2015, residents were concerned with the Shark mural on Dr. Joe’s Intracoastal Lounge, but it turned into a popular attraction.

“If [the owners are] losing money then I would [remove it],” Rivera said. “But otherwise it gives them press: all press is good press.”