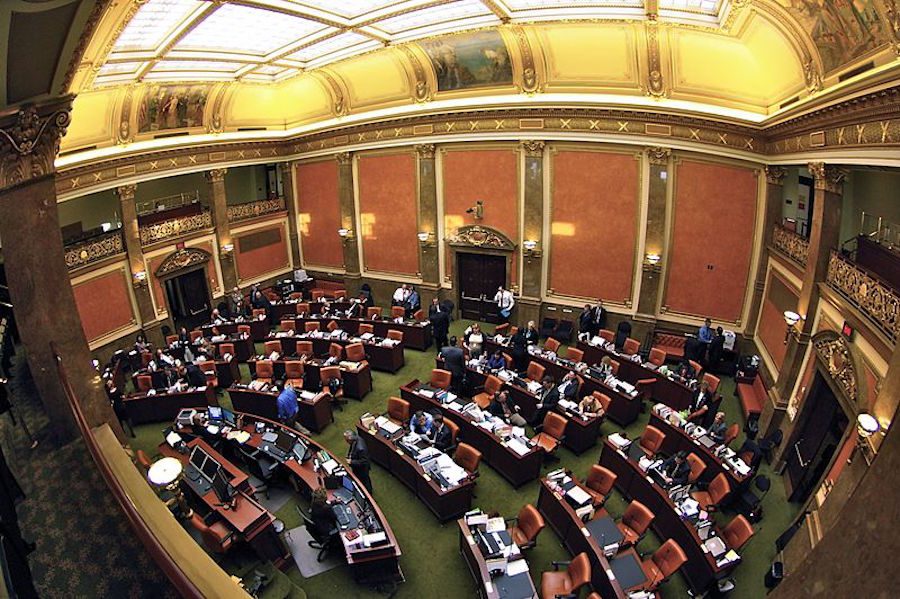 The Florida Legislature had crafted a bill in response to the shooting at Marjory Stoneman Douglas High School.

The Florida House agreed Wednesday evening on a 67-50 vote to pass the Marjory Stoneman Douglas High School Act which will allow certain school personnel to carry weapons on campus. Two days prior, the Senate passed the bill on a 20-18 vote. This comes just three weeks following the mass shooting that claimed 17 lives at the school which the bill was named after. Following a debate that spanned nearly four days, the legislature agreed to the creation of of a “marshal program” which will allow county sheriffs to train volunteers during a 132- hour period on how to carry and use concealed weapons. Classroom teachers who exclusively perform instruction will be exempt from this program, leaving staff members, teachers involved in ROTC, U.S. Reserves, the National Guard or law enforcement to be eligible to join. This decision has intensified the controversy surrounding gun control throughout Florida schools.

“I personally feel less secure knowing that there will be certain staff members having access to weapons,” Failla said. “They’re trying to solve gun violence by putting guns in schools, and I just don’t see that working out well. It’s ironic. They are trying to solve the problem by using what’s causing the problem.”

Gov. Rick Scott has said he opposes arming teachers and is in favor of increasing resource officers on school grounds instead, an idea Spanish teacher Luis Martin said is more practical.

“I don’t think arming teachers is the best option that we have,” Martin said. “I understand the idea to have more than one resource officer for the schools, but arming the teachers is a terrible idea.”

Sophomore Sam Havkin called the marshall program a step in the right direction.

“I think arming teachers would be a good idea, but it might only be a good idea in theory,” Havkin said. “It may work out in your mind, but not so much when actually applied. I think it would work if there was a system, like a fire extinguisher, where the gun would be available to use for protection by teachers, but the teachers themselves would not be armed. And, of course, the teachers would have to pass tests to see if they’re mentally competent to use a gun.”

Now that the bill has been revised to limit the number of teachers or staff who have access to such weapons, sophomore Kyle Townsend agrees with Havkin on the matter.

“Firearms on campus would serve as a deterrent to anyone who would think about coming onto campus to shoot it up,” Townsend said. “If someone comes onto campus and whips out a gun and five other people whip out a gun on them, then they’re not going to do anything. It will help lower the likelihood of [a school shooting].”

The bill’s other act provisions include adding a three-day waiting period for gun purchases and raising the legal age to buy any gun from 18 to 21. Martin supports the decision on these amendments to the bill.

“I totally agree with raising the minimum age to 21,” Martin said. “Why would you not be allowed to buy a beer, but you’re allowed to buy an AR-15? On the three-day waiting period, I’d probably increase it to more than three days for more of a cooling period and having to get certified on how to use a gun before you are able to purchase one.”

In contrast, Townsend disapproves raising the age to 21, explaining that it could yield problematic consequences.

“The only problem I have with that is that 21 is also the age where you allow kids to have alcohol legally,” Townsend said. “You’re giving them weapons that could be used to kill someone with the ability to get intoxicated simultaneously. Additionally, if the selective services are at 18, then they could theoretically enlist into the army where they still have to deal with firearms before 21.”

Approximately $400 million for security measures and mental health programs are also set aside by the bill. Martin explains why this is a suitable beginning in the process to protect students from threats by relating back to the military.

“I totally agree with it; it’s a good measure and a good start,” he said. “I think, especially here in Florida, we have to make our schools impenetrable and there has to be some kind of security. In the military, they call it sanitizing the area which means one way in and one way out and it has to be guarded, without a doubt.”

The Legislature has sent the bill to the governor who has 15 days to decide whether or not to sign it into law.