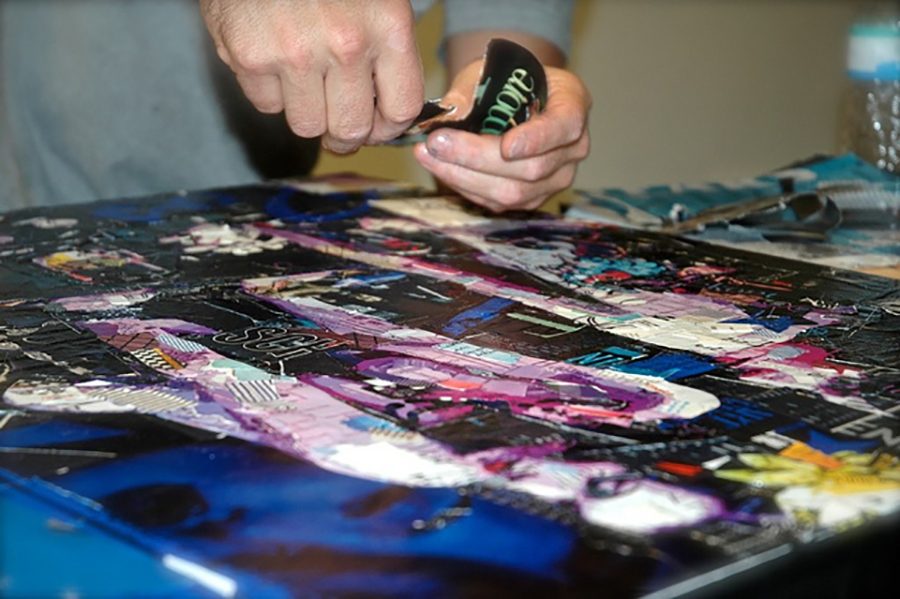 In his collage portraits, Derek Gores recycles magazines, labels, data, and assorted found analog and digital materials to create the works on canvas.

To receive extra points for Jim Finch’s digital art class, sophomore Logan Ehlers has been exploring the pieces of local collage artist Derek Gores at the Foosaner Art Museum since March 1. The “Derek Gores: Local Edition” exhibit, which began Sept. 17 and ends March 23, is open and free to the public on Wednesdays through Saturdays from 10 a.m. to 4 p.m. The exhibit displays more than 60 of his works spanning 10 years, including his signature collages, charcoal paintings and three-dimensional installations made of donated objects and scrap pieces.

“Nobody has a style just like him,” said Ehlers, a Digital Art 2 student. “It’s very unique. It’s a lot of things that you wouldn’t think could make a shape, and they look like something completely different from what you would think. I honestly like the fact that he can create stuff like that without doing much. It makes it more mysterious. I’ve never seen anyone that makes something look so realistic using just pieces of paper.”

The public exhibit also features interactive rooms where viewers can indulge in hands-on activities including games, Gores’ workshops, demos and more throughout the show.

“Some students have never been to the Foosaner Art Museum,” digital art teacher Jim Finch said. “I wanted them to know where that location was, to see what’s available to them and to enjoy it. It’s free. If you don’t use it, then it goes away. I want them to experience the joy in finding out where museums are in their community so they can be open to new experiences and learn new techniques and things that are going on.”

Apart from giving his students the chance to earn extra points, Finch said he believes there is a greater benefit to visiting Gores’ exhibit.

“Derek Gores is a risk-taker,” Finch said. “Art is always safe. I like creating pretty pictures and illustrations. It’s very satisfying. But when it gets really satisfying is when you do something that no one else is doing and you’re creating art in a different kind of way and people react to it. Derek Gores, his people react. He’s collectible. He’s affordable to collect, and he does some risk-taking that I think is really exciting in a different way to show things. The general public finds it intriguing and interesting. I want my students to be exposed to an opportunity where they can sometimes take risks in their art, too.”