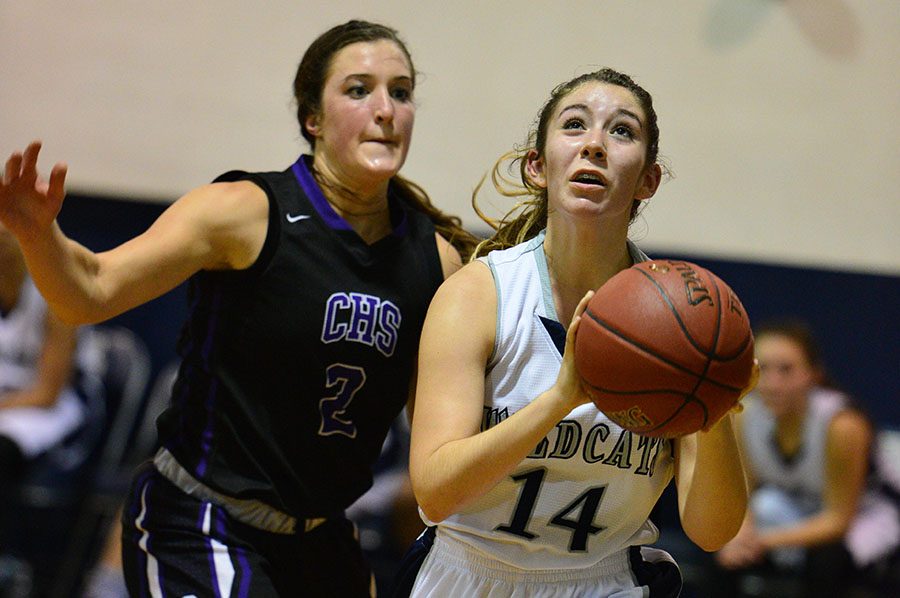 Senior Taylor Smith sets up for a shot last season.

Six-day-a-week practices have become a reality for the girls’ basketball team. Previously, the Lady Wildcats practiced three to five days a week with no weekend practices, but now Saturdays in the gym will be the norm. Sophomore player Zohra Mujeeb said although the new schedule already has impacted schoolwork, it will enhance the team’s skills overall.

“It gets tiring at times because I come home and I’m tired then I have to do homework,”  she said. “But it’s not so hard as long as I don’t procrastinate. The long practices will probably prove to be a good thing for us this season, so I’m not upset about it.”

With the team joining the Cape Coast Conference, so the level of competition will tougher than last year, according to Mujeeb.

“I think [the new practice schedule] is mostly because our coach pushed for it because we are in the Cape Coast Conference so he wanted us to be ready for the new teams,” she said.

“I am taking three AP classes, so it’s hard to stay up and do homework or study for a test that’s coming up, because I don’t want to procrastinate,” Damaraju said.

However, she does not find this task impossible and said she believes the change will be beneficial to the team.

“It will definitely help our team because some of us are in condition, others not so much,” Damaraju said. “This practice schedule gives us a chance to get everybody on the same level. Also, we have a lot more new plays than old ones, so we need time to practice those as well. The practice schedule also gives us more time to bond as a team and get to know each other’s playing styles.”

The new schedule will remain in effect only until the team starts to play games.

“This schedule is temporary, because once the season actually starts next week, our practices will go down to like twice a week because of all the games we have,” Damaraju said.