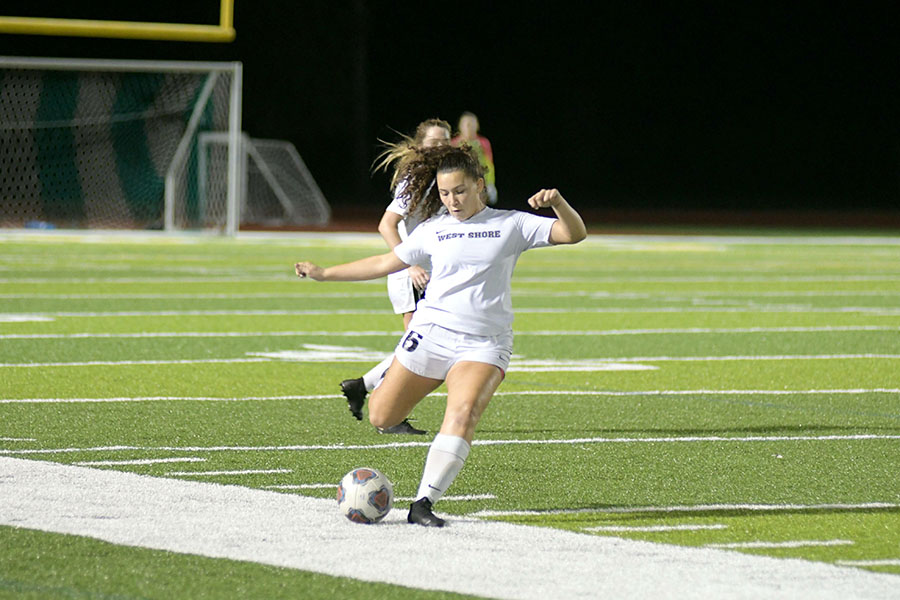 The girls’ varsity soccer team has reached the end of its historic season, losing to Lake Highland Prep 3-1 in the Class 3A, Region 2 Tuesday night in Orlando. The Lady Wildcats (16-3-3) fell one match short of making the Final Four for the first time in school history.

“We are all very emotional right now,” Courtney Carter (12) said after the game. “We obviously hoped to get to states, but we fell short on that goal. However, I am very proud of my teammates and their impact to this great season.”

Lake Highland led 1-0 at halftime, but West Shore tied the match when Emily Tizol (10) scored on a 30-yard corner-kick early in second half. But Lake Highland scored twice more to ice the game.

“It’s very heartbreaking,” Lena Hatter (12) said. “We had an amazing season and what we did will go down forever in Wildcat history. I love these girls and all the hard work they put in and I’m happy to see what the returning players can achieve next year.”

I really enjoyed playing this season and am super-happy with how far we made it,” she said. “It was super-fun and a great experience. Even though we made it farther than we expected, every game leading up to the regional final was a battle.”

Traditionally, varsity coaches pull up a few players from the JV squads to maximize their roster space for district run. Coach Jenny Pazderak decided to pull up Kate B. (8) and Skye Kohler (9) and Maddie Uhlmeyer (9).

“It was really fun being able to watch and play with players above my skill level,” Kate said. “Personally, I think it helped me better myself for the future seasons.”

Even though the team came up short of a regional and state title, the girls still used the game as a learning experience.

“The game against Lake Highland was a very hard and fast-paced game,” Carl said.” Everyone gave it their all and it was a hard fight. Bummed we lost, but overall it was still fun.”

The returning girls vow to have vengeance in their minds next season, but they know it won’t be easy to accomplish what they did this year, which included winning the district championship.

“What we did this year no other team has done,” Ella McMullin (11) said. “We were underdogs all season because of the valuable players we lost last year, but we proved all of our doubters wrong with what we did. I am grateful for all of the girls and how hard they worked, but we need to start preparing  for next season to fix the missing pieces [the seniors] that we are going to lose.”

By James Green and Cannon Hester