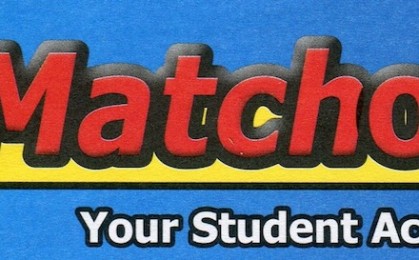 Most people just out of high-school don’t think about helping high-school students, let alone helping them fund-raise. But Brad Vokey, owner of Matchomatics, created a fund-raiser the school has participated in every year for as long as most teachers can remember. Vokey was a teenager himself when he created the Valentine-inspired computer matching service 35 years ago.

“It started out as just an idea in high-school, then in my first year of university I went with it and it took off,” Vokey said.

In 1984 the internet was just developing, so Vokey’s company much more manpower.

”I had about 20 staff workers scanning and faxing forms for schools,” he said. “Now most forms are picked and made online.”

As society has changed, Vokey’s company has kept up with the times. Matchomatics calls itself “the one-and-only all-inclusive student matching fundraiser.”

”It is inclusive of everyone and it’s funny and makes people smile and during that time everyone has something to talk about,” junior Tyanna Jeter said.

The questionnaire does not target for any specific gender or age.

”I wanted to be respectful and inclusive of everyone,” Vokey said. “When I started this company society was either male or female, and now there is everything in between.”

In addition to matching students based on their interests, Vokey said he also wanted to help teenagers learn to manage money.

”I think it’s important for students to learn about the economy and how to make and spend money wisely,” he said.

“I think this does help teach the Junior Class officers about fund-raising from the original idea, picking dates for the quiz and the selling of forms and then of course, marketing on the news and around school,” she said.

Vokey said running the company for so long has provided fond memories.

“I find that many students have found that they have married the people from the top of their list when they look back at their school yearbooks with there match-o-matics forms in them,” he said. “It makes me feel good to know that I helped them determine a commonality that they didn’t see before.”