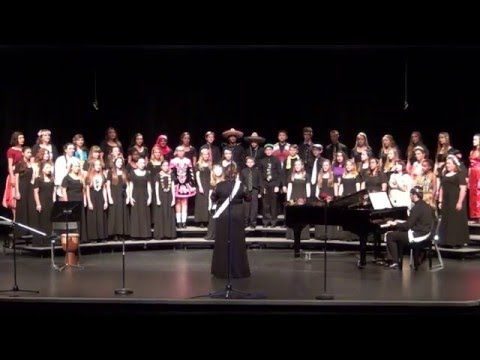 After weeks of preparation, the school choir anticipates the new fall concert, which is set to be held Friday at 6 p.m.

Chorus teacher Amy Davis decided to hold the upcoming concert in place of the usual Christmas one, with a theme of “peace and unity.” The concert will still include a couple of Christmas songs, but its main feature is the several songs from areas all around the world, including the American immigration-themed song “Give Me Your Tired, Your Poor”, the Christian hymn “Shall We Gather at the River”, the African tribal song “Sisi Ni Moja”, the American Holocaust-themed song “When I Am Silent” and the American folk song “Simple Gifts.” All five levels of the choir, beginning and advanced middle-school choir, mixed chorus, women’s chorus and chamber chorus will perform.

“We were thrown off a little bit when we were recording for our Disney audition since we were distracted by those other songs,” mixed chorus member Ava Haroulakis (9) said. “But I think our chorus has been working hard on unifying our voices together and putting in the effort to make this concert sound good. Even though the concert’s already next week, I think we’re going to do a good job.”

Similarly, Sabrina Himmelsbach (9), who is a member of the women’s chorus, expressed a few doubts and worries.

“I kind of feel unprepared because the concert’s in a week and we haven’t been practicing that much lately,” Himmelsbach said. “So we’re kind of just all of a sudden trying to practice as much as possible every day. But, I think we’ll end up wrapping it up fine.”

Even the select members of the most advanced level of chorus, chamber, expressed feelings of unease. One member of the chamber, Laura Shelton (10), who has built up experience and was selected to audition for the all-state chorus event, had a lack of certainty.

“The preparation is incredibly poor,” Shelton said. “But our teacher works very hard to get us to performing level. A  lot of the songs we’re doing are in different languages, so it’s more difficult to learn the verses for it which is one of the biggest struggles. We’ve also been learning a lot of new songs recently, so we’re struggling to get to the point where it’s all memorized.”