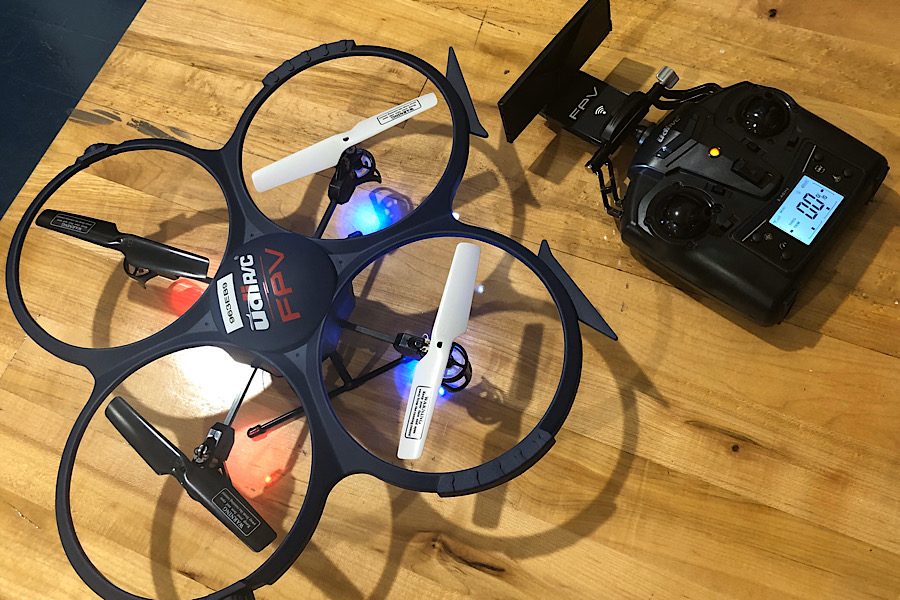 “Look at the phone, not the drone!” Jill Whitacre, team coach and sponsor of the Whirly Girls, jokingly deemed as her new motto as the varsity members’ new drones whizzed past.

The Whirly Girls have recently obtained a brand new set of drones. The U818A HD drones are significantly larger than the drones the varsity members have used in the past.

“These are very exciting because we have only had pretty small drones, maybe like six inches,” team member Abigail Watson said. “We have never had experience with these larger ones. It’s hard to adapt to them, but it’s cool to see how they work.”

Additionally, the drones have a camera attached to the bottom. To connect to the camera, an app must be downloaded and they must connect to the drone’s WiFi. After downloading the app, the girls place their phones on top of the controller. By doing this, they are able to see what the drone’s camera can see.

According to Whitacre, the cameras would help the girls in any future video-based competitions, in which they would represent their school. However, the cameras could also be put towards TV production at West Shore.

“These [drones] are being used in all kinds of journalism-type events, particularly if there is some kind of weather situation or sporting event,” Whitacre said.

These drones could have a profound impact on WCTZ itself if used by its crew members. During a soccer game, for example, the drones could be used to capture footage of the Wildcats in action. The drones could – quite literally – put a whole new angle on WCTZ segments, according to Whitacre.

Whitacre has not yet proposed the idea of TV productions, because the drones still have some issues that need to be resolved, such as camera quality.

“When we looked at the footage, it was grainy and it had a lag in it,” Whitacre said. “If we want to do it, we ought to get something that’s a little bit more professional.”

Whitacre said her team is researching whether or not to get GoPro cameras for the drones to improve the quality of the footage.

Furthermore, the Whirly Girls used the drones for the first time on Monday. As such, they are still working out the kinks and haven’t really gotten the chance to play with them to the full extent. However, the enthusiasm within the team remains the same.

“These will be awesome because these aren’t really like racing drones,” Watson said. “These are more to capture footage and make videos for the school.”