Despite a COVID-impacted year, the show — finally — goes on 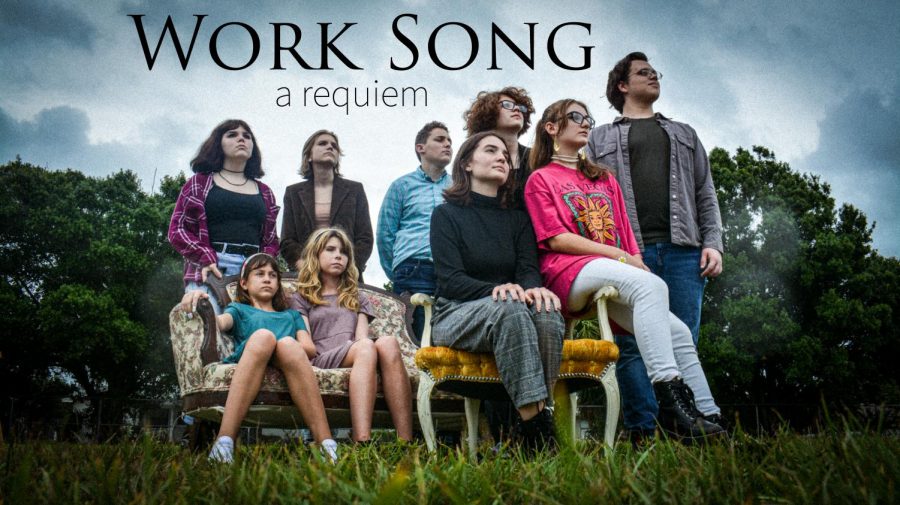 After COVID-19 transformed the world, it was near impossible to imagine how the theater program would adapt to the new requirements and regulations. Despite this, West Shore thespian Troupe 6034 put on a full, in-person production which involved teachers, performers and technical crew.

“It was definitely a challenge,” first-year theater director and teacher Breana Davey said. “Since COVID is something that’s so new to all of us, it was hard to get everything approved. But I think we persevered and the show is something we’re all proud of.”

The show, an original one-act titled “Work Song,” was written by New York University student and West Shore alumnus Evelio Sotolongo as a graduation requirement. It was performed in West Shore’s outdoor courtyard for a limited crowd of 50 on May 22.

“Working with an original play was really fun,” Davey said. “Instead of basing things on works that have already been established, we got to figure things out as we went. The cast and I really became like a little family, just trying to make things work.”

Davey stepped in as a last-minute theater sponsor after previous sponsor Thomas O’Bryan left the position in February. This change followed the sudden retirement of long-time director Maureen Fallon days before the start of the 2020-21 school year due to health issues.

“I was really stressed,” Davey said. “But it was worth it. Having come in so last-minute, and with all the theater [substitutes]. I know the kids were really looking for some stability. I think I was able to provide that, and I really like the direction we are going.”

Davey said she most admires the work put in by students involved in the performing arts.

“I was inspired by both troupe and tech,” she said. “To see the dedication and passion these kids have is just amazing. To have kids who, in the middle of testing, stay after school until 9 or 10 p.m., it was crazy. And on the day of the show, everyone was there until at least midnight, with tech staying until like 1 a.m. I was really inspired by that because I know that at that age I would never have done something like that.”

The technical crew was tasked with creating its first full set since the district thespian competitions in November 2020. Junior and stage manager Haley Tucker said the process felt like a return to form.

“It was nice having at least one show this year,” she said. “It was stressful at first, but once things started moving it was like a regular show. It was difficult having the show outside. We had to make larger set pieces to fill the space of the stage and we had to move all of our light and sound equipment outside so we could have a proper performance. We also had to call people at the last minute to help set up the lights and get microphones.”

Tucker said working with Davey for the first time was easier than expected.

“She would communicate with tech and really trusted our abilities,” she said. “It was also refreshing to see someone this year who cared about the future of the theater program.”

Tucker said she felt the tech crew benefited from the experience overall.

“It was challenging to work with an original script,” she said. “The script wasn’t finalized until a few days before the performance, so it was hard to work on [sound and light] cues. And the show ended up being OK. It wasn’t our best performance, but I am very proud of everyone for coming together and working hard. Overall, it was a good learning experience for everyone involved and I’m really excited for next year.”

The show was not a smooth process for everyone involved, however. Sophomore and principal cast member Shane Winsten said he was more frustrated by the process than inspired.

“When we started working with [Sotolongo], it was a challenge,” Winsten said. “We were promised that the show would be for us, about us, and that’s just not what we got.”

Winsten said the process of working with a newly written play was ineffective.

“It was definitely harder to do a new show,” he said. “Normally when you do a production, there is plenty of source material to go off of. You can watch other performances and choose an interpretation. We didn’t have that, so we had to come up with everything completely on our own.”

The show is a drama which follows the family of recently deceased author Joe Carter as they are forced to quarantine together following his passing. Winsten, who plays Joe’s brother Raymond, said the organization of the show could have been better.

“[Sotolongo] is a new writer,” he said. “So there were a lot of issues with the show. We had to keep reworking and rewriting stuff, like plot points that didn’t make sense. Because of that, everything was very disorganized. And then we put in all this hard work, during AP exams, and on the day of the show, [Sotolongo] told the audience it was a “workshop.” So that was really upsetting, because it definitely was a full production and was never treated like a workshop at all. I really think that he had a vision for what the show would be and what it would look like, and he was really upset when we didn’t match it exactly.”