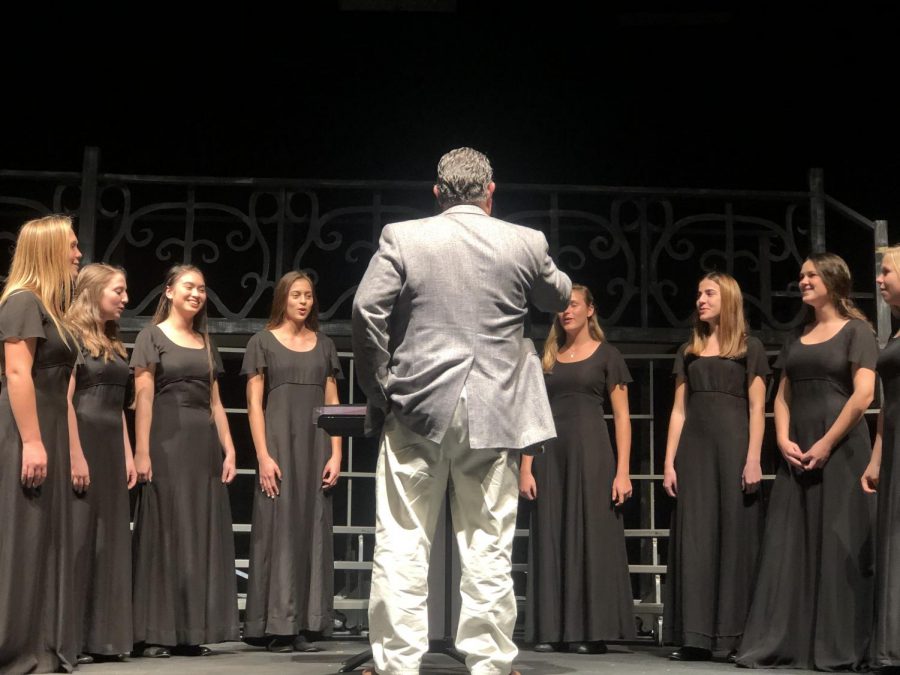 With a theme of “Peace and Unity,” the chorus performed its first-ever autumn autumn concert Friday night, featuring nine songs performed by all 57 members of the choir.

The show opened with “The Star-Spangled Banner” arranged by Carl Sauerbrunn, which was sung a cappella by the chamber choir. The women’s choir followed by singing two songs, the first “Simple Gifts” arranged by Aaron Copland, and the second “When I am Silent” arranged by Joan C. Varner. Next came the mixed choir, who also sang two songs, the first “Give Me Your Tired, Your Poor” arranged by Mark Brymer, and the second “Gather at the River” arranged by Brian Tate. Afterward, the chamber choir sang three songs. The first of these was “Herbstlied” arranged by Russell Robinson, the second “Os Justi” arranged by Eleanor Daley, and the third “Jingle Bells Traditional.” Normally, all the songs are conducted by choir director Amy Davis. However, a twist was put on “Jingle Bells Traditional”, for which Principal Rick Fleming conducted the mixed choir. To end the concert, all members of the chorus got together and sang “Sisi Ni Moja” which is arranged by Jacob Narverud. Every piece sung in the concert was accompanied by pianist Coral Khem (12) except “Sisi Ni Moja,” which was accompanied by Arvin N (8).

Although multiple members of the choir had expressed previous worries on the concert, many had positive feelings towards the outcome of the performance.

“In the beginning, it’s always really difficult with new pitches, new rhythms and foreign languages,” Davis said. “Not everyone is on the same page, musically. It was a struggle. Initially, kids don’t really love the songs, but as they get to know them, they really start to sound good. We start putting emotion behind it, and so I think the concert went really well. There is no such thing as a perfect performance, but I think they did really well, especially since this is the earliest in the year we’ve ever done a concert.”

Khem, who had only one practice with the choir before the concert, expressed similar thoughts.

“I think the concert went great,” Khem said. “Since this was my first time playing with the chorus besides the rehearsal an hour before the show, it went very well. We were together and it really sounded great. Arvin and I made a good team by turning pages for each other. We sit next to each other in orchestra, so we already knew how to work with one another.”

But Mitchell Cooper (9), who has been a member of chorus for three years, said things “could have gone better.”

“I messed up a few things sometimes,” Cooper said. “I do think the concert went pretty good overall, though. As a whole, we all did pretty well. It was actually pretty awesome and pretty amazing. my whole family was there, and I got to see them and all my friends. It wasn’t our best, but it was extremely well put-together, especially considering how little time we had.”