As teen vaping grows, so do health concerns 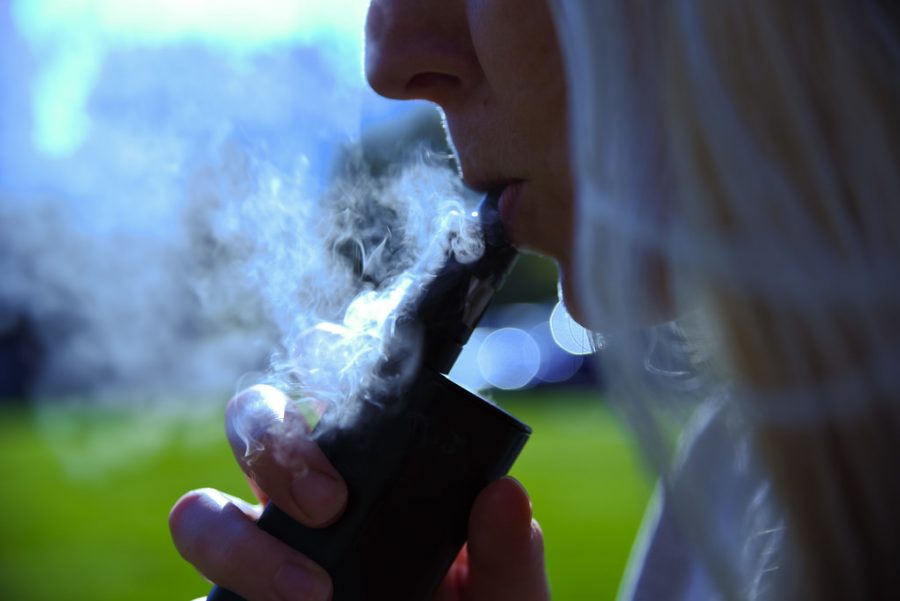 At 14, he found himself at his former girlfriend’s house just talking and hanging out until she offered him something new: an e-cigarette.

At the time he thought because it was just vapor, it couldn’t possibly be harmful. He wanted to fit in so he reasoned it couldn’t be that bad.

He had never smoked before, and as he drew the vapor from the e-cigarette into his lungs, he began to feel it. A light buzz left him craving for more.

“I wish I never got into it,” the senior said. “I’ve spent over $500 on it and I hope to stop forever, but I’m always wanting to do it just because it feels so nice.”

E-cigarettes weren’t initially created for recreational use. The first prototype for the modern vape was invented by Hon Lik, a Chinese researcher who wanted to create a device for smokers who were trying to curb their addiction.

Early designs were clunky and had a short battery life, but modern vapes have built on all facets of Lik’s prototype, extending battery life and increasing portability. The result has created problems for schools as modern vapes can now be stealthily carried on school campuses.

Two types of vapes have grown in popularity among teenagers.

The Juul fits inside a palm and, at first glance, resembles a flash drive, while the Suorin Drop is slightly larger and shaped like a teardrop.

In part because of their sleek design of the delivery systems, vaping has risen dramatically among teenagers despite a decrease in smoking with an estimated 2.1 million teens using some form of e-cigarettes in 2017 according to the Food and Drug Administration.

Juul labs, the managing company of the Juul, recently posted its best quarter with the company now valued at $15 billion.

Vapes use refillable cartridges that contain various e-liquids containing such flavors as mango, cool cucumber and creme brulee, and other sweet flavors that attract teenagers.

“It’s actually an epidemic for the youth,” Assistant Principal Catherine Halbeur said. “The district has put a big push out due to the health dangers of it and what we do is we follow the district discipline ladder on our end. School Resource Officer [Valerie] Butler also writes the students a civil citation and it’s for students who are in possession of a tobacco product or a vaping device or any part of that product. We have heard rumors and some remarks from other students that there has been vaping on campus, and this is a pretty big problem we have been trying to solve.”

Students caught on campus with a vaping device face a monetary fine and a mandatory tobacco education class. A second infraction would result in an additional requirement of mandatory volunteer service and a third offense would result in a suspended driver’s license.

Butler noted that even schools with fewer of disciplinary issues are seeing a surge of vaping on campus.

“It’s a big problem since through vaping, kids who haven’t smoked before are being exposed to nicotine,” she said. “And they’re becoming hooked on it.”

Halbeur said the school’s strategy is to encourage students to police themselves.

“We hope that being more informed, students will make better decisions and that they also will spread the word that this isn’t good,” Halbeur said. “We also appreciate our students and know how our students do look out for each other, and we do hope our students step up and tell their friends or somebody else ‘hey, you shouldn’t do this. This isn’t healthy for you and this is why.’”

Researchers have called underage vape users members of the ‘Guinea Pig Generation’ because studies have been inconclusive regarding the full effects of vaping over time.

According to FDA Commissioner Scott Gottlieb, the nicotine associated with vaping necessitates the need for harsher regulation on tobacco products.
“Nicotine isn’t a benign substance.” Gottlieb said in a press release. “This is especially true then it comes to children, and the effects that nicotine has on a developing brain. That’s why we need a strong regulatory process that puts these new products through an appropriate series of regulatory gates.”

These concerns haven’t discouraged teens from using the product.

“I personally still did it in spite of the health risks just because I wanted to fit in,” the senior said. “Eventually, fitting in became an addiction to where it was hard to stop. People who are really considering getting into vaping just need to realize the risks currently of vaping and furthermore the risks that may be formed in the future.”

In addition, the FDA recently has announced a plan to ban the sale of flavored e-cigarettes in thousands of gas stations across the country and will also a plan to increase regulation involving age-verification requirements on websites.

For now, the FDA has mandated that flavored products be banned from convenience stores unless the manufacturers can provide evidence for the potential benefits of these products.

But while the FDA has begun to crack down underage vaping, Juul Labs has responded by increasing its lobbying budget by 167 percent in an attempt to circumvent or mitigate any new regulations.

As of now, Juul Labs has shut down its social media accounts and has pledged to invest time to ensuring that kids know the consequences and dangers of vaping.