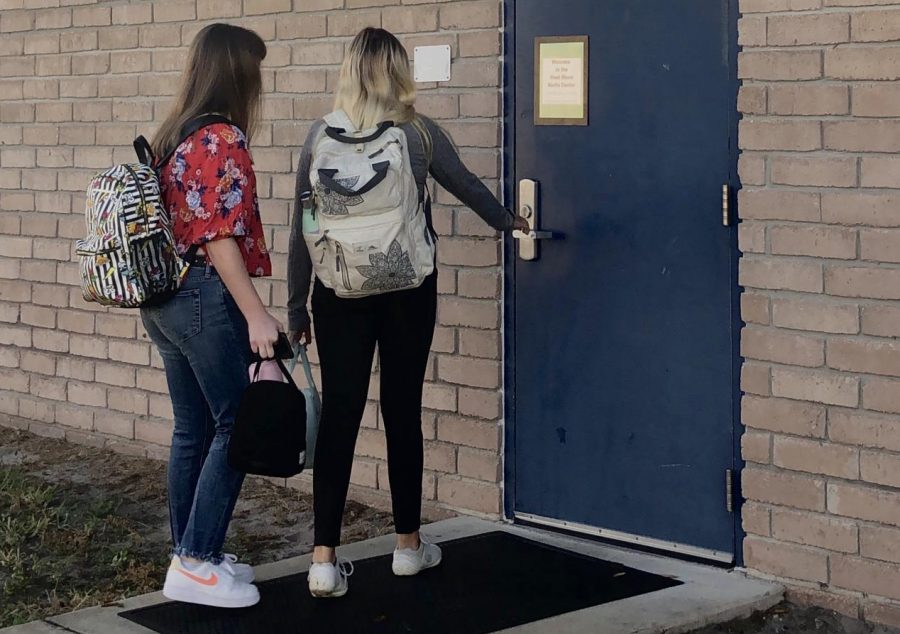 Eighth graders Bella B. and and Evelyn L. completed their Algebra 1 EOC exams the week after Winter Break.

Eighth-grader Madison M. flipped through her Algebra 1 notes in preparation for the end of course exam. Because of a COVID-19 triggered late start to the school year, Algebra 1 students were forced to test following a two week winter break from classes.

“I felt unprepared and anxious,” Madison said. “I have a really bad memory and that long of a gap between learning the material and going over everything really gave my brain a chance to forget all the stuff I had learned and practiced.”

According to Assistant Principal Glenn Webb, the state set a time window for schools to administer statewide exams for the 2020-2021 school year. In order to comply with the compressed curriculum posed by block scheduled, Webb said the school had students test for the Algebra 1 EOC Jan. 5-8.

“I would’ve changed the date to before break because everything would be fresh in my brain, and I would feel more prepared and better about how I was going to take the exam,” Madison said.

Webb said that the school’s years’ late start on Aug. 24 left schools with limited time to administer state-mandated EOC exams prior to the second semester.

Webb said the school respects the value of the Algebra 1 EOC as a graduation requirement and has worked to maximize the content coverage under the block schedule.

“[Students] could have as much processing time as they could to learn all of the material they needed to be successful,” Webb said.

While the later administration of the exam provided teachers with additional time to cover course material, Madison said Winter Break caused concern for her and her peers.

“I think that testing after break will have an impact on most people’s scores because as students we don’t get that many breaks as other places, so we wanted to enjoy every minute,” Madison said. “So you wouldn’t want to or sometimes even think of studying. I also think that the sooner you take the test after you’ve prepared and practiced all the material, the more it will stick in your brain.”

Despite the later testing dates for the algebra EOC, Webb said the exams had to be completed in a timely manner, before the first semester ended.

“It really is unfortunate coming back from the break,” Webb said. “We did have a day for kids to get re-acclimated to the school environment and stuff, to have to do that right away. But next week is the scheduled final exams, and then after that, the kids who are taking the algebra EOC, they wouldn’t be in their algebra classes. They’re in four new classes.”

Because of the block schedule, EOC exams were administered in the fall for first-semester classes, and will be given in May for spring-semester classes. Make-up dates have been incorporated into the schedule to accommodate students who were absent during their designated testing days.

“With FSA, there is no option to test in the fall,” Webb said. “So a student who has seventh grade math right now, or has one of their seventh through tenth [grade] English classes right now, they aren’t going to be able to take their FSA until May.”

“No one that I spoke to was upset that they were able to do more work or teach more standards and go more in-depth before having to take the EOC,” Webb said. “Initially, when students were supposed to be taking the EOC the first week in December, there was a lot of frustration because they still had essentially eight weeks of material to cover.”

While testing after Winter Break drew skepticism from students such as Madison, Webb said any implications presented by the break will be difficult to determine.

“Coming out of research and into education, when you change multiple variables it gets tricky to determine what causes what,” Webb said. “With so many kids e-learning right now, there are possibly some significant gaps in learning from the spring of last year when we were forced into a distance-learning environment with no warning at all. It’s going to be very difficult to determine the effect a two-week gap might have.”

Webb said he does not expect algebra 1 EOC scores to be impacted by the exam dates.

“I’m speaking strictly for West Shore,” Webb said. “I know the quality of the education that our students get, the attention to detail and the communication between teachers and students is great.”