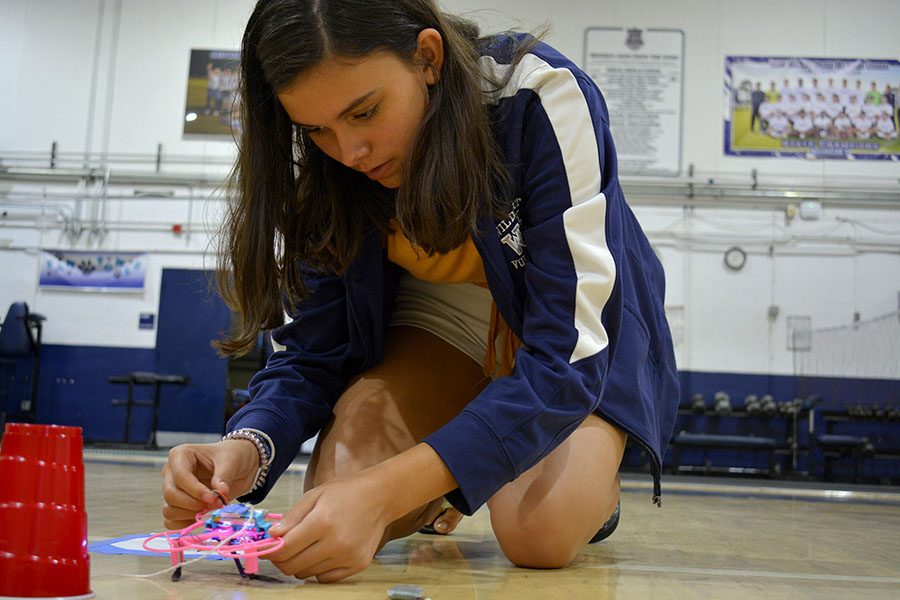 Eighth-grader Abby H. changes the battery on her drone.

West Shore’s Whirly-Girls won first place at the Innovations Games event Friday at the Solar Energy Center in Cocoa, along with $500 in prize money.

The team participated in the Unmanned Aircraft Systems challenge which consisted of two different competitions. The first was a head-to-head obstacle race and the second was a team competition. However, it was later announced that the team competition just for fun and didn’t count toward competition. For the obstacle race the Whirly-Girls had to guide a drone through gates and around slaloms. The race was modified each heat to be harder in the following round.

“We have been preparing for the competition since October-ish,” senior Erin O’Brien said. “We would practice mostly in the morning at 6:45 before school, but as we got closer to the competition we met more during Power Hour and after school as well.”

The girls started to learn how to fly the drones at the beginning of this school year.

“I was very proud of them and glad they were rewarded for their hard work,” team sponsor and coach Jill Whitacre said. “These girls put in a lot of extra hours to achieve this level of success.”

The team competed against various schools from Brevard County, including Bayside and Eau Gallie high schools.

“It was scary competing against older opponents because we didn’t know how good they were,”  eighth-grader Anylah R. said. “We just assumed since they were older, they would be better and probably have more experience,”

The Whirly-Girls attended at the Innovation Day competition last year, but that was different.

“Since we didn’t have drones yet, the girls were required to produce and present a video advertising our school,” Whitacre said. “They won second place.”

The Whirly-Girls formed in November of 2017.

“I attended a STEM Innovation workshop and learned about the school districts desire to bring a drone project into our schools,” Whitacre said.

The only way for girls to join the team is to be invited.

Whitacre said they will be expanding the team but they haven’t finalized the process yet.