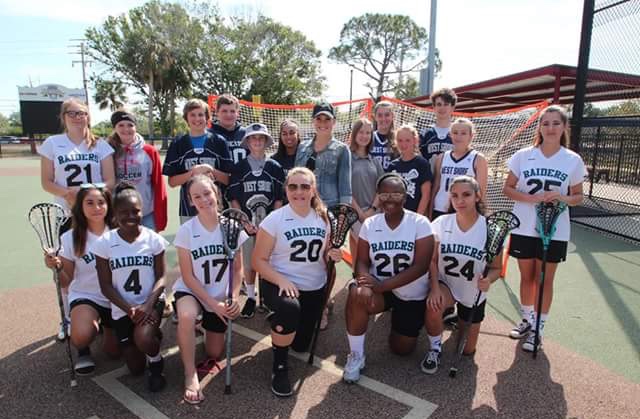 The boys’ and girls’ lacrosse teams from both West Shore and Rockledge participated in PAL’s third annual Spring Family Fest at the Field of Dreams in West Melbourne on March 24. The program encourages people of all ages with mental disabilities to attend and take part in sports, art and dancing. The two teams joined forces to expose the attendees to the sport of lacrosse. The sports portion of the Family Day was planned by the Parker Foundation, a non-profit organization looking to provide sports opportunities to anybody with a mental or physical disability. Founder Melissa Parker takes personal interest in this event.

“Our son is affected by Autism so we went to the Scott Center for treatment, but after that there was nothing for him to do socially or sports-related. So we were inspired to start the foundation in 2015,” Parker said. “We want all kids to have the opportunity to play sports. Our foundation does sports, arts and education programs for children with Autism and their families.”

Brothers and Sisters of the participants also were encouraged to attend in order to improve their relationships with their sibling affected with autism or other disability.

“The kids’ siblings can come out and play too,” Parker added. “That way they can become good role models for the kids with autism, who typically have a harder time with certain activities like sports or social events.”

Players from both teams demonstrated aspects of the game to anyone at the event.

“It was pretty simple. We just played with the kids and had some fun,” sophomore Shea Ix said. “We taught them how to shoot, pass and catch. It was a great time.”

“I thought it was a cool experience working with the kids. They are all so nice. Overall it was just a great experience,” Pippett said. “It was really easy to talk to them because they weren’t judgmental or holding back. They would listen when you gave instruction and would happily talk to you. They just wanted to be your friend.” “I enjoyed it because it was great to go from a player who is always taking directions, to a sort of coach that was giving help and guidance to the kids,” Chang said. “Most of the autistic kids picked up the sport real quick and were pros in no time.”

West Shore player Isabel Richards described the impact of the event on the team.

“Not only was it like an extra session of practice, but it allowed our players to bond with other teams and each other because of challenges we might have faced.” Richards said. “The event was a huge learning opportunity for our girls. We were able to see our strengths and weaknesses because those were the things we taught really well or couldn’t teach the kids at all.”

The girls plan to participate next year in order to grow the game within the community.

Coming up, the girls’ lacrosse team plays Cocoa Beach for the second time on April 10 at 5:30 p.m. Then for the final game of the season and Senior Night, the girls play Rockledge on April 12 also at 5:30 p.m.