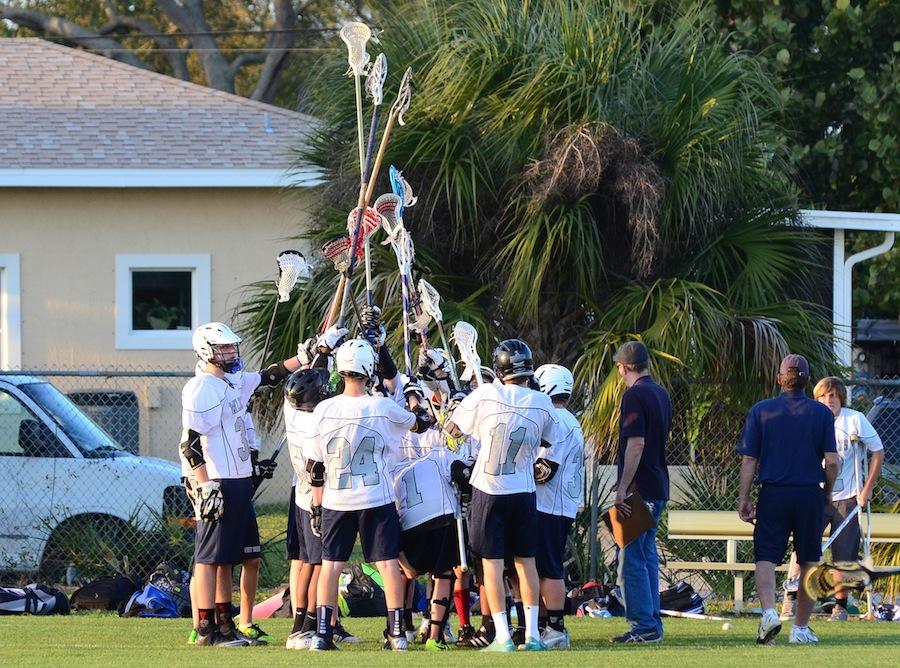 Before a game, Wildcats have a team chant to wish for luck.

Boys’ lacrosse honored their seniors on Thursday night with a hard-fought match against the prestigious Viera High School Hawks. Despite falling to Viera fifteen to six, the Wildcats were pleased with their performance, considering the eleven to two beat-down they received a month ago against the Hawks.

“Overall, the team wasn’t upset about the game last night,” senior goalie Jack Moore said. “Viera has a very good lacrosse team, and they were expecting to come onto our field and beat us like they did last time, but we competed well with them. I’m proud of my team, and I had a great senior night.”

The younger Wildcats became emotional after last night’s game, as they have all developed strong bonds with the five seniors, who will soon be leaving the program.

“It’s really going to be tough letting Ryan [Bellone], Jack [Moore], Will [Clifton], Ian [Chan], and Caleb [Benedict] go,” junior defender Jake Dimond said. “They have all been in the program for several years now, and they have become more than just teammates; they’ve become family. They are great players and even better friends. Losing them will be like losing an enormous part of the program, but I know that they will visit us frequently.”

The Wildcats will strive to keep their seniors on the field as long as possible, as they face the Melbourne High School Bulldogs during the district playoffs on Tuesday at Melbourne Central Catholic High School.