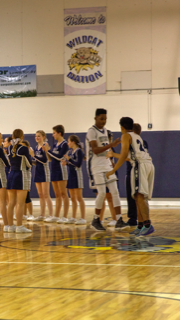 “I think we lacked a lot on defense in the second half after gaining a decent lead in the first,” sophomore Daniel Shelton said. “We need to play more aggressively along with run our plays correctly to be more successful against teams.”

The victory marked the third time this season the Wildcats defeated Edgewood, giving them a 3-0 record against their cross-county rival heading into the Junior/Senior Pride Classic.

“Going into the tournament, we need to play as a team and push the ball more on offense,” said junior Travis McClendon, who scored 6 points Tuesday. ” Defensively, we need to work harder to not allow teams to get into the paint as much and rebound more efficiently.”

The Wildcats next travel to Edgewood to kick off tournament Thursday at 7 p.m.