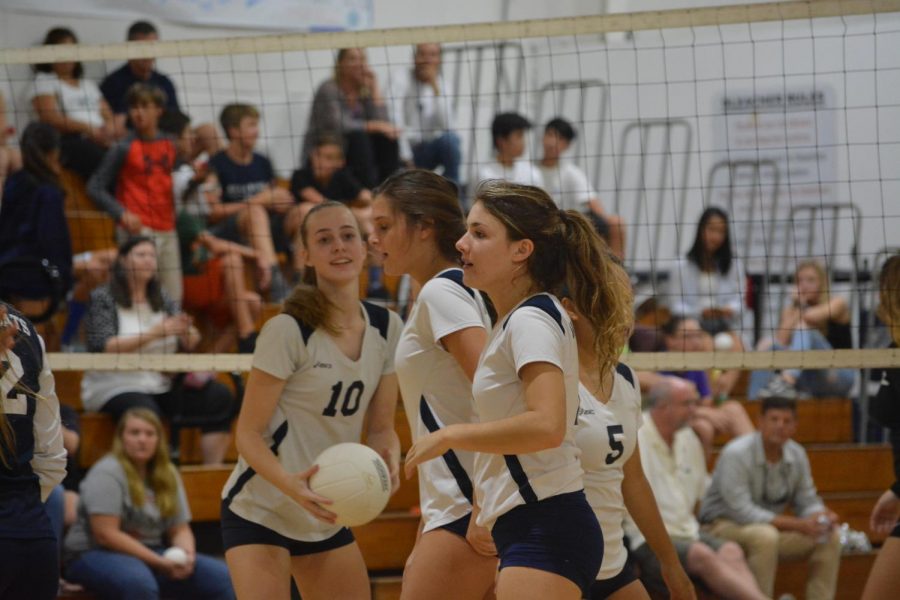 Junior Mallory Chauvin, sophomore Chloe Lemstrom and senior Sally Kempfer celebrate winning the point and get ready for the next rally during the annual white-out Volleyball game held in the gymnasium

A white-clad crowd cheered on the volleyball team to a 3-0 victory over school rival Edgewood on Wednesday in the gymnasium. The annual white-out or “fill the gym” game is a tradition for the Lady Wildcats’ volleyball team and has supporters come dressed in white clothing to watch the team take on its rival, the Indians.

Senior middle blocker Arianna Issitt won Player of the Match, finishing the game with three aces, seven kills and one block. According to her, the win was expected, but still boosted team morale.

“We’ve already played Edgewood this season and we beat them in three so we were expecting a similar outcome,” Issitt said. “This was our school rivalry game, so coming off of this win [will] definitely give us some more energy to finish out the season strong.

According to Coach Laura Hall, each component of the team demonstrated perfect execution, along with displaying stronger teamwork than usual which contributed to the blowout victory.

“Everybody was on tonight,” Hall said. “The middles were hitting really great, and the defense was awesome, I couldn’t ask for anything better. The plan for the future is to keep working on the same thing we’re doing. They’re communicating, they’re playing great together as a team, and they’re just gonna keep working on that.”

Senior setter Emily Shoemaker, who recorded one ace and one dig, shared the same beliefs as Hall that the team played better as team this game.

“I definitely think we did play more cohesive, considering we had a common goal,” Shoemaker said. “We all really wanted to win in front of the crowd, so I thought we played really well, [being able to] shut out Edgewood in three sets on our fill the gym night.”

Amid college preparations and copious amounts of homework, senior Armando Santamaria-Bruno found time to support the Volleyball team in this critical match.

“There was just a lot of energy in the crowd, all the little kids were going wild,” Santamaria-Bruno said. “It was all good, all of our players were playing with a lot of energy and playing very cohesively; they were doing a heck of a job. It was really awesome to see them work hard and pull off a win against Edgewood.