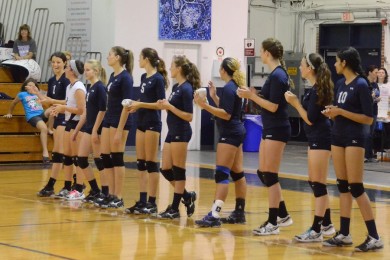 Volleyballers throw candy and shirts to the crowd at the Cocoa game on Sept. 18.

To rally fans to tonight’s Lady Wildcats’ volleyball game at Melbourne Central Catholic, the team is hosting a drawing for students that attend the upcoming game.

“Our teams are rivals because our coach, Bonnie Priester, was a former coach of MCC,” junior Casey Schauman said. “Also, some of our club players play at MCC as well so we know they have talent.”

Students who attend the game should save their ticket stubs, write their names on the back and return them to a varsity player Wednesday to be in the running to be one of the four fans who will win a volleyball T-shirt, a free drink and pizza and a picture with the team.

“We are really excited to try and get fans out to this game,” senior Hannah Krasny said. “We have some stiff competition, and we need some support in the stands. It’s honestly a win-win. We get fans and the fans get free food.”

The four winners will be chosen at the next home game on Oct. 2.

Tonight’s game will start at 7  in the Melbourne Central Catholic gym.