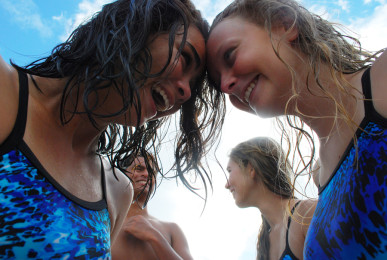 “The girls spanked the other team, and the guys’ meet was closer,” Coach Donald Gornto said. “The boys were losing until about the last two events, but they ended up pulling it out in the end which was nice.”

“We had all the underclassmen swim most of the time because FAA isn’t really that good,” Heinricher said. “If we would’ve used our starters the whole time, we would’ve crushed them.”

The girls’ team shared the same confidence from the start of the meet.

“We knew it would be an easy meet for us,” junior Emily Dubec-Hunter said. “We felt bad because the other team only had five girls, and they didn’t even have enough people to compete in all the events.”

Halfway through, the teams took a break while seniors were escorted by their parents and Gornto announced their names and plans for college.

“We stopped in the middle of the meet used for when the divers sometimes go out,” Heinricher said. “Senior night just made the meet take longer, but it was all right.”

The teams will compete again on Tuesday at Sherwood Park to close the regular season.