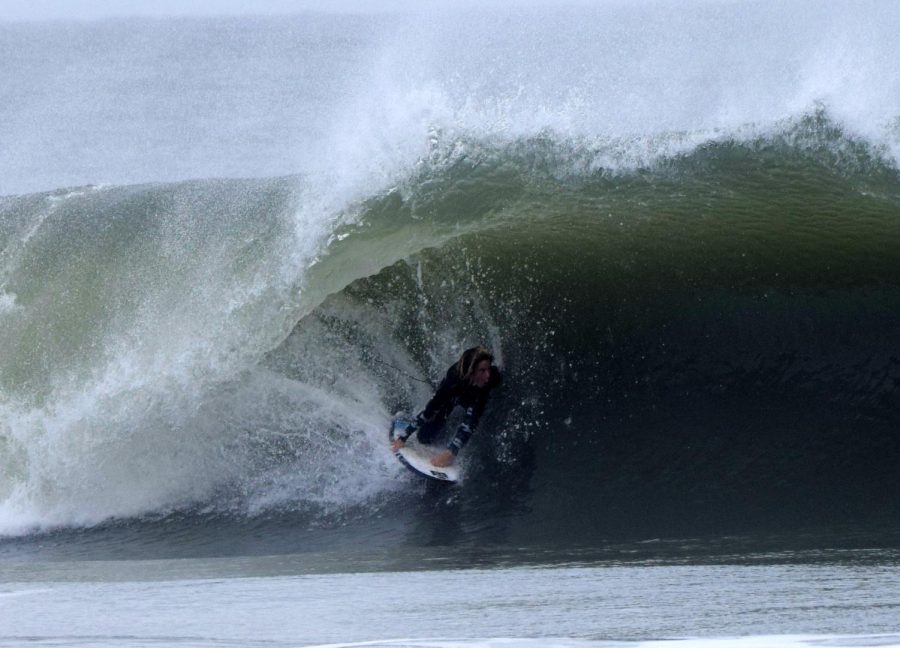 Wittemann reaches the end of a barrel.

It’s 5 a.m on a cool, windy Monday morning before school. While most students are still asleep, seventh-grader Teddy Wittemann splashes some water in his face, grabs his board, and makes his way across the street to the beach where he begins his daily surf session.

“I’ve been surfing since I was six years old,” said 12-year-old Wittemann. “It’s something I love to do.”

Wittemann competed for more than five years in surfing competitions and trains with Surf Dojo in Satellite Beach. Brandon Roberts, who runs the dojo, is also Wittemann’s mentor and trainer.

“Brandon, for the past few years has helped shaped me to be the surfer I am today,” Wittemann said. “It starts with his rigorous workouts that push us to become better, such as the ‘Animal Flow,’ which is like a yoga hybrid and skating with Carvers [skateboards].”

The surfing prodigy competes out of Florida as well, in states such as California and the Outerbanks in North Carolina. He has also traveled to Costa Rica.

“I’ve surfed a bunch of different breaks throughout my years doing competitions,” Wittemann said. “I like how I get to travel out of Florida and experience new breaks and compete against different competitors.”

Wittemann met the criteria to be selected as an Eastern Surfing Association all-star and for the National Scholastic Surfing Association, which is one of the few national youth sports organizations that requires its participants to maintain academic standards to compete.

“[ESA] only selects twenty-five kids on the east coast,” Wittemann said. “Surfers like Kelly Slater and Lisa Anderson both learned their competitive skills through ESA. Our coach, John Moates, trains us and helps improve our skills and performance.”

When COVID-19 placed the country on lockdown, nationwide competitions and all future training sessions were canceled.

“When [Surfing Dojo] closed, we didn’t train for five months,” Wittemann said. “I was stuck at home doing my own workouts and getting out on the water as much as I can. I compete a lot over the summer, so to have all those events canceled, it definitely took an impact on my surfing career.”

Wittemann is sponsored by multiple companies including Salty Crew, Sun Bum, Cobian Footwear, and Catalyst surf shop in Melbourne Beach. He said his goal is to pursue a surfing career.

“I would love to go pro one day,” Wittemann said. “Doing something that I love every day would be great, honestly. And it’s nice to know that my whole family supports me on this path that I have chosen. My brothers and my parents come to every local [competition] and/or watch me on life when I travel out of state or country.”

Wittemann said he believes his accomplishments are due to his constant family support.

“I couldn’t be prouder honestly,” Ryan Wittemann, his brother, said. “I have always known that my brother has the potential to go pro. I take every chance I get to go out and watch him compete.”

The Wittemann brothers said their shared support of one another shaped the bond they have today.

“It’s nice being close with my brother,” Ryan Wittemann said. “We are always pushing each other to be better.”