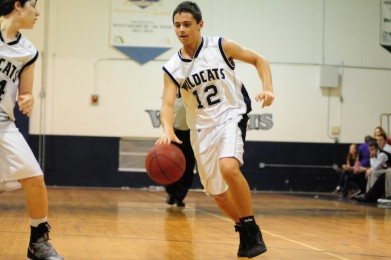 Junior Shane Potter drives to the basket in a 2012 game

Despite 21 points from junior forward Chris Mikulas, the Wildcats’ boys’ basketball team were outscored 17-8 in the game’s final quarter and fell to division rival Space Coast 74-59.

The Cats arrived at Space Coast for an uncharacteristically early varsity game with a 5:30 p.m. start, and were able to keep the game close for the first three quarters, even outscoring Space Coast in the third quarter, 22-17, cutting an 11 point half-time deficit to six.

It was the Cats’ late game execution that proved to be their downfall as they were outscored 17-8 in the fourth quarter, dropping their regular season record to 1-4.

A defining characteristic of the Cats so far this season has been their lack of possession and ball security.  Potter attributed their loss primarily to this factor.

“We lost the game because of our inability to keep possession of the ball and our lack of effort,” said Potter.

Junior center Jake Dimond was unable to contribute for much of the game as he was dealing with back issues that have plagued him since the team’s victory over Edgewood on Tuesday.

“We always need our big men healthy,” senior captain Sam Lack said. “Without his presence inside, they were able to out-rebound us and we failed to shoot well enough down the stretch to make up for it.”

The Cats will travel to Merritt Island to play their next game on Monday, hoping to improve their regular season record to 2-4.

Potter hopes to see the problems that led to their defeat against Space Coast addressed and improved upon by the time their next game rolls around.

“We need to focus as well as keep executing and running the floor,” said Potter.