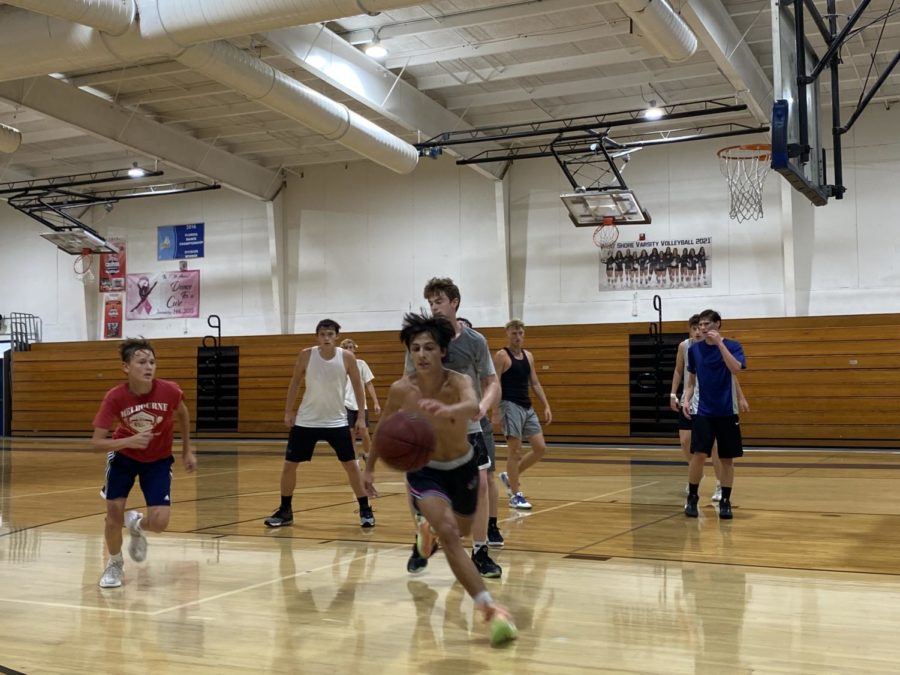 Senior Charley Pavlick conditions with his team on Set. 30 to prepare for his upcoming basketball season.

Senior Charley Pavlick entered the basketball court for the regional quarterfinal game immersed in the excitement with the cheering crowd.

Last season, the varsity basketball team made it to the regional quarterfinals for the first time in 15 years, losing 49-52. After the record-breaking run, basketball head coach Wardell Collins announced he would no longer remain in the position following conflicts with his players and their parents.

“We had four candidates in the running for the varsity coaching position,” Athletics Director Tony Riopelle said. “After a lengthy process of interviews, it was clear that Corey Burton would be the best and most qualified coach for varsity.”

For three years, Burton served as assistant coach for the junior varsity team. In that capacity, Burton was able to build strong relationships with the players.

“Coach Burton was my coach while I was on  JV and I was able to bond with him,” Pavlick said. “Although he was a tough coach at times, I think he will be the best coach to  help our team succeed this year.”

Heading into the new season, Burton  has promised to maintain the momentum established last winter.

“My hopes for the team is to build off what we had accomplished last year,” Burton said. “From a record standpoint, it was one of the best years in school history and making it to regionals. The team this year has the potential to be in the same place we were last year.”

Burton’s move up to varsity left an opening for a new JV coach. After looking at all the candidates, Riopelle decided to go with a coach who had a strong familiarity with the program. As a result, he hired English teacher David Thompson, who four years ago was a senior on the team.

“I think that the fact that I was once a player will benefit my coaching, as I hope to translate what I learned from being a player now to coaching and teach our players,” Thompson said.

The basketball players have been holding weekly conditioning sessions to in advance of the fast-approaching season, which begins next month.

“Thompson has been blending really well with this team so far,” freshman Christian Rebec said. “He has a great sense of humor and has not been timid in jumping into the team and giving corrections.”