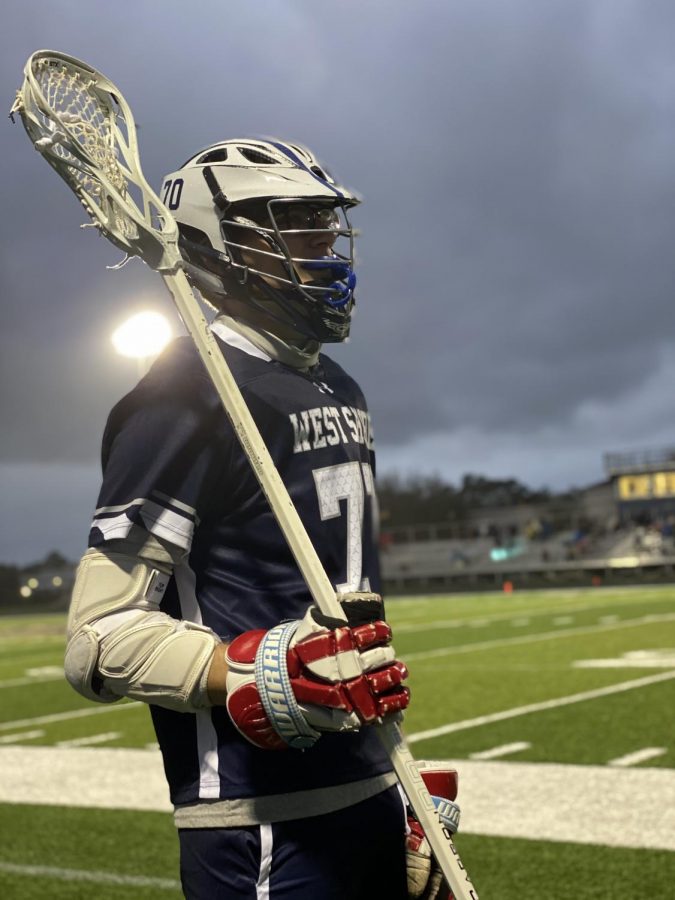 Senior Cris Saladino watches his teammates during the Feb. 19 game at Holy Trinity. The Wildcats lost 14-12.

Before COVID-19 shut down schools and sports programs last spring, the boys’ lacrosse team was celebrating a victorious win after their final game of the season and the last game for the six seniors. Amid the celebration, now senior and captain Cris Saladino watched his coach pack his things and leave – never to be seen again.

“It was a smack in the face when he walked off [Coach Scheuerer],” Saladino said. “It was sort of a relief because Doc had these traditional views of lacrosse and really didn’t evolve to the modern play of the game.”

As the 2021 lacrosse season starts, Saladino remains the lone senior left on the team. Saladino said he has to step up this year, not only as a player but as a captain, after the recent loss of his coach and multiple players.

“With the experience I have, I’m able to be an example for everyone else to learn and improve,” Saladino said. “I have to make sure this team is trying its hardest in order to be successful. This year, I have taken the responsibility of running the defense during practice and making sure they are primed for in-game situations.”

“The core of our team is tenth graders. We need younger kids to build the next generation,” Johnson said. “It is important that we keep this strong group of players for our future years.”

With the loss of Coach Scheuerer , the next generation of the program includes the addition of Coach Herrman who acted as the assistant coach last season.

“After our winning season last year, Coach Herrman wants us to leave off of where we were last year,” Johnson said. “Our coach will let there not be a leader. He is very team-oriented and comes from a background of winning.”

Johnson said Herrman has the qualifications of a successful coach and thinks the team is squared with his thinking.

“He knows what he is talking about, and is willing to ask us if he doesn’t know the answer,” Johnson said. “He wants to do what’s best for the team. Practices are now more efficient than they were in the past. Coach now splits the defense and offense at the beginning of practice to work on their different skills and techniques and then coming together near the end of practice to work together.”

The team seems to be content with the change-up of the coaching staff and is anticipating a successful season.

“My dad [Coach Herrman] is definitely going to be harder on me and he’ll show that he is not easier on me because I’m his son,” Luke Herrman said. “He expects a lot out of me from being a leader and a player, it’s not any extra pressure.”

Coach Herrman said he is looking forward to the start of the season and believes with minor changes, they can pick up right where they left off.

“We played a very weak, soft zone last year and didn’t really have an offense, Coach Herrman said. “We ran plays every now and then but didn’t have a set and consistent offense. We have a lot of kids that play travel ball, so our team has been staying well-conditioned off and during the season.”

With the lack of an assistant coach for the season, Johnson said he doesn’t worry about the lack of leadership.

“Since Cris and I are captains this year, we are both prepared to step up and have the opportunity to put forth leadership for the team,” Johnson said. “I’m excited that I’m going to be working with [Cris] this year. He is someone who loves the game of lacrosse and puts his heart into this team.”

Saladino said he knows the team has the potential to be victorious this season.

“I wouldn’t trade anything else for the team we have this year,” Saladino said. “We have a really good core group of kids that have been playing with each other for years and have created a bond that is unbreakable. We have to play at a very high level each night and I believe with my direction, we can go out and win and hopefully lead us to a district championship.”