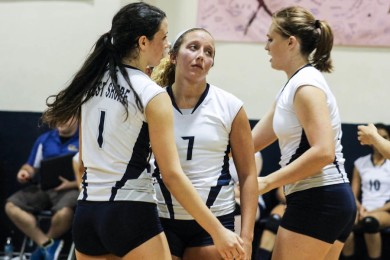 Juniors Kasi West, Taylor Kelley and Kaitlin Inganna meet after a point, in a district match against Edgewood on Aug. 27

“It was mostly first game jitters,” Inganna said. “We will hopefully be able to come out more focused in the future, I know we can play better than that.”

The team started slow, struggled to block and convert kills and fell behind by as many as eight points in the first set, before rallying to tie the set at 21-21. The Lady Wildcats would lose the set 25-21.

The team’s head coach, Bonnie Priester, stands 25 wins away from her 400th career win, and Inganna says that reaching that milestone is definitely a team goal.

“I know we can have as much success as we did last year,” Inganna said. “We just have to work hard in practice, and keep our heads up after losses like this.”

The team next hosts the Astronaut Lady War Eagles on Sept. 3, with varsity play beginning at 7:15, with junior varsity and freshman play preceding at 6:15 p.m. and 5:15 p.m., respectively.