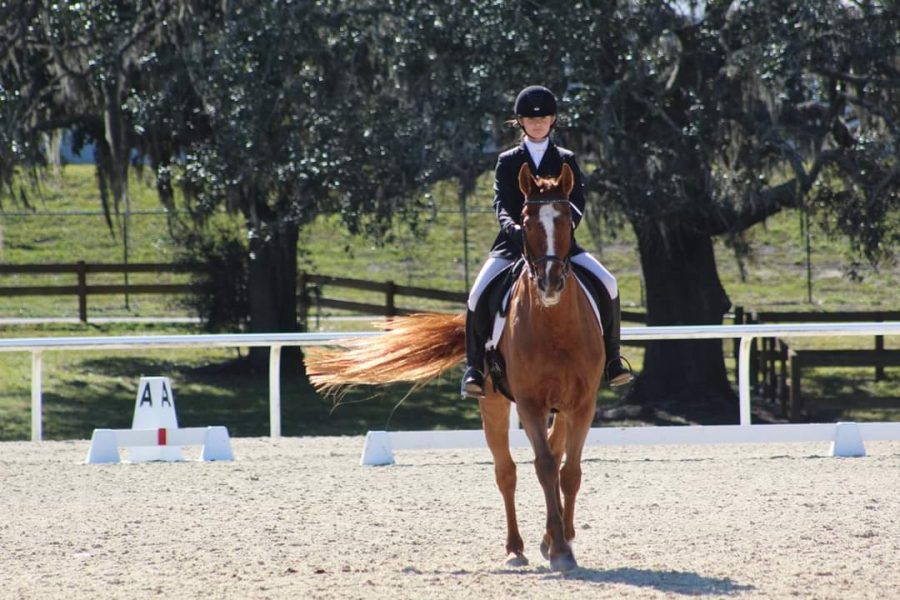 Eighth-grader Bella Ruohomaki saw horses galloping by her neighborhood when she was ten years old. Inspired by the horses’ riders, she convinced her parents to let her be an equestrian. That moment sparked a four-year journey to becoming an award-winning equestrian. “My horse, [Gus], when I first started riding him, he was taller than me,” Ruohomaki said. “And I was terrified of riding him. And my trainer was like, ‘You’ve got this,’ and she pushed me to ride him. And once I got to know him he was the sweetest horse in the world and wouldn’t hurt a fly.”

Ruohomaki rides at the Brevard Equestrian Center. She practices about four times a week, two of which are private lessons. She competes in both jumping and dressage events during showcases.

“One of the things that sets Bella apart from other students is her ability to take and implement corrections, her compassion for the horses she rides and her drive and motivation to succeed,” Ruohomaki’s dressage coach, Lisa Smit, said.

After four years of training, Ruohomaki earned eighth place in the region for the United States Equestrian Federation and has won first place at several shows.

“It wasn’t an expectation,” Ruohomaki said. “It was just, ‘OK, we’ll see how far this goes.’ And as the days went on and on I thought, ‘Hey. maybe I’ll get more advanced than this.’ It’s pretty amazing. I never thought that I’d get to this point.”

When she first approached her parents about riding, Ruhomaki’s mom, Sherry Ruohomaki, had reservations.

“I was afraid she was going to fall off and get hurt,” Sherry Ruohomaki said. “I’m one hundred percent on board now, but as her mother I will always worry about her falling off. Especially now with the jumping we can see her get thrown off the horse which can be scary.”

Ruohomaki said she has not sustained any serious injuries, but does face some physical demand from dressage and jumping.

“I’ve gotten thrown off,” Ruohomaki said. “I’ve fallen off plenty of times. I’ve actually gotten kicked before by a horse and stepped on.”

Ruohomaki is constantly training for her season, which runs from December through October or September, each year.

“One of the things that sets Bella apart from other students is her ability to take and implement corrections, her compassion for the horses she rides and her drive and motivation to succeed,” Smit said. “Riding is a difficult sport based on feel and timing, both which are complicated to learn and truly understand. Bella’s drive to always be a better rider for her horse is a constant motivation. That, and she likes to win.”

According to Sherry Ruohomaki, her daughter has competed in about 20 shows.

“[Bella] has actually been excelling rather quickly,” Sherry Ruohomaki said. “As long as she does well in school and as long as she puts in the hard work, we are going to continue supporting her in her ambitions. As parents, we’re trying to help her meet her goal and aspirations.”

Ruohomaki said she is currently working to earn her bronze medal by receiving higher scores at shows.

“As with any student, be they horse or human, observing transformation and growth is so gratifying,” Smit said. “Watching a young lady like Bella give up social activities on school breaks to spend time with the horses gives me a sense of pride unrivaled by much else. She has grown into a talented and empathetic rider and is now learning to train unschooled horses, thereby sharing what she has learned. I’m so proud of her dedication and empathy.”

What began as an idea inspired by passersby, turned into a sport Sherry Ruohomaki said her daughter would like to pursue in college.

“It’s always exciting to go to [Bella’s] lessons,” Sherry Ruohomaki said. “But when you go to a show and she’s all dressed up and concentrating, she has such confidence when she is going in there. And to see that grow and expand as she goes on is really great to see as a parent. She’s almost a completely different person.”