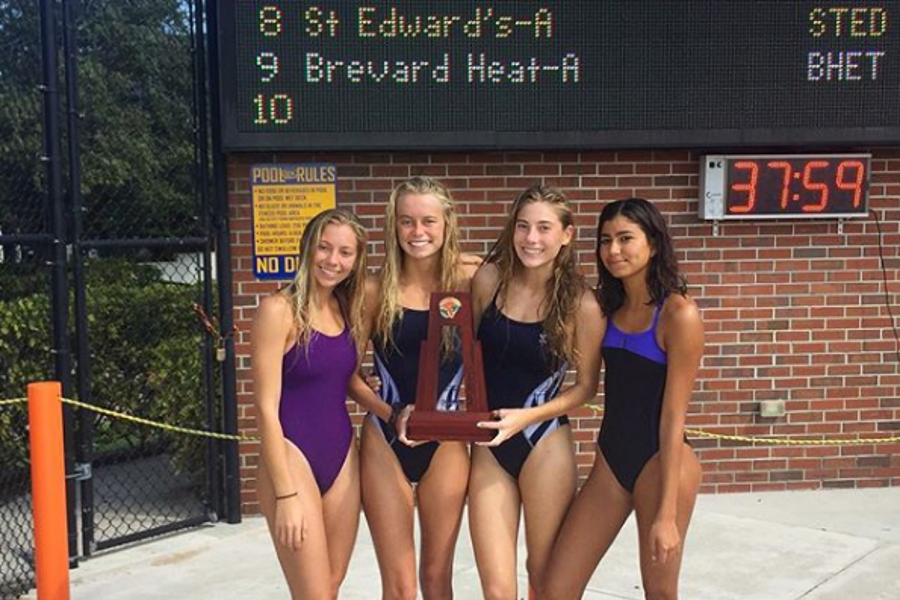 The girls' swim team with their trophy

After six years of trying, the girls’ swim team finally dethroned the reigning champion Cocoa Beach in their district meet at Indidan River State College on Tuesday. In addition , the team broke the school record for the most district champions.

“I was racing my teammate Katie Laferriere  from Rocoa Swim Club,” junior Sydney Weatherspoon said. “In both the 50 and 100 freestyle I was right next to her, so it really pushed me to win my events. I actually ended up winning both events, so I scored 40 points individually.”

Along with Weatherspoon, sophomore Katelyn Owl won both of her individual events, the 200 freestyle and 500 freestyle.

“Cocoa Beach does not have any particularly fast mid-distance to distance freestylers,” Owl said. “I was really just trying to race myself and ended up going a personal best and season best.”

On the freestyle relays, the girls placed first after seniors Ali and Phoebe Theophelis were added to the roster.

“I think our relays were able to be as good as they are since of all the chemistry we have together,” Weatherspoon said. “Katelyn and I train on the same club team and we’ve trained with Ali and Phoebe for years on the high-school team. We all push each other in practice because we all have the same goal.”

The girls plan to celebrate their victory but stay focused in training as the regional meet approaches.

“We’re all just trying to try to qualify for states and the only way to do that is fast swims at regionals,” Owl said.

The girls will compete in their next meet on Nov. 10 at Lake Highland Preparatory School in Orlando.