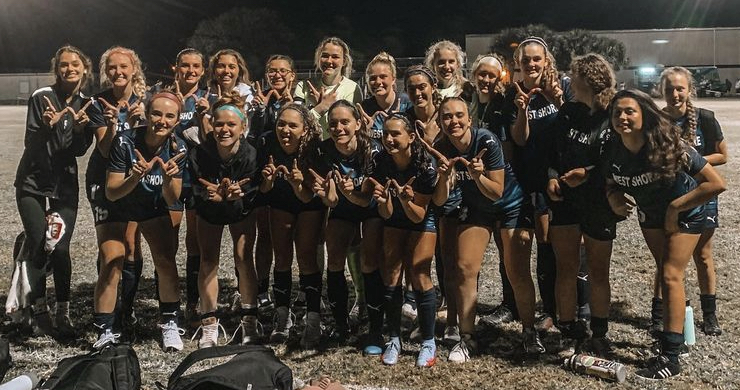 The varsity girls’ soccer team has been hitting its stride with back-to-back shutout victories, defeating St. Cloud 8-0 Friday and Palm Bay 17-0 Thursday running their season record to 5-1. That loss came at the hand of rival Edgewood during the season-opener on Nov. 9.

“The first game was a little rough defensively. We were all over the place, and we weren’t winning our tackles,” junior Bree Ehmer said. “Now we’re more confident one on one pressing the ball. We’re finishing our opportunities.”

The team has been improving, allowing only six goals on the season, and goalie Lauren Mannix has been a key factor in that improvement.

“I’ve been worried about trying to be more talkative and lead the defense from the back because we have a lot of new players,” the junior said. “Almost everyone’s new in defense, so we really have to communicate. I’ve really been trying to be loud so that we can keep it organized.”

Mannix said the team also has been working on formations and passing.

“We have a really new team,” she said. “A lot of new players from JV came up. We lost 11 seniors, so we had to kind of reform and we had to figure out how that works. I think that’s why we struggled so much in the first game because we hadn’t really worked on our formation that much.”

Mannix pointed to the 6-0 victory against Satellite on Nov. 30 as a season high point.

“I was extremely happy,” Mannix said. “I literally felt like we just won districts because I feel like Satellite has kind of a big ego and especially because they beat us 2-0 [last season]. I think they were going into the game thinking it wouldn’t be that hard. And then we embarrassed them. It’s one thing to beat people but to beat them by six goals, that’s insane.”

Mannix pointed to several factors for the team’s success.

“I think our team chemistry is improving as we spend more time together,” she said. “We’re connecting on more passes. We spend a lot of time together, and it changes a lot. We eat lunch together on game days and we hang out. We play soccer and we practice every day. So I think our chemistry was building, and I think that’s another reason why we’re succeeding.”