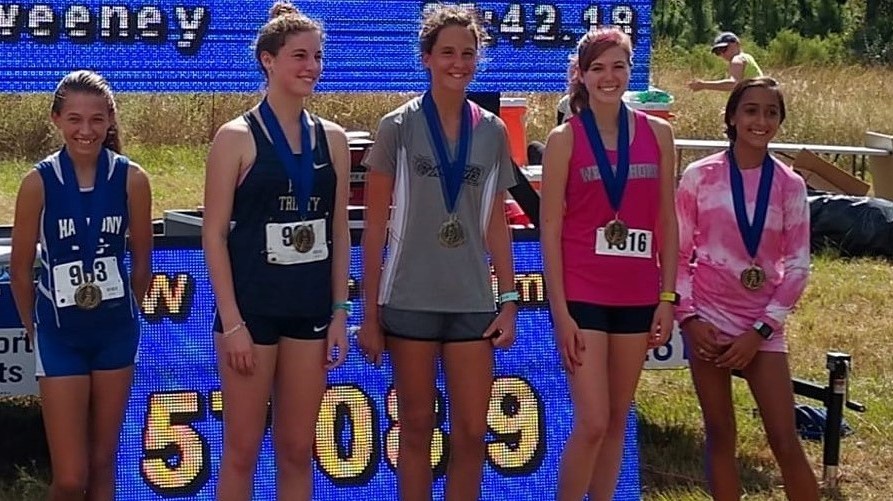 Sophia Bailly (second from right) poses with her second-place medal.

The girls’ varsity cross-country team placed sixth out of 33 teams and the junior-varsity team placed fifth out of 11 teams during the Windermere XC Invitational meet in Clermont on Saturday.

“The varsity girls performed better than the virtual prediction going into the race,” Coach Julie Hannah said. “We were predicted to finish 10th out of 33 teams but ended up sixth. Considering my number two girl was sick and ran ‘easy’ which lowered the team average, I think we did great. The JV also performed better than expected with running one hour later than the original race time making it unbearably hot. Sophia [Bailly] ended up second overall with a new [personal record] as well as Angela [Maley].”

The teams raced through gritty conditions at Lake Louisa.

“If the weather had been cooler, I think the conditions would have been much better,” sophomore runner Sophia Bailly said. “I ran about three hours later than I’m used to, so that felt odd. The race starts in a big open field, and within 200 meters, that open field becomes a small path. So having everyone at once trying to get through that path first definitely made a difference, because I had to go out fast and make sure I was ahead of the other girls right from the start.”

Bailly placed second out of 146 total runners in the 5k. She finished behind the No. 1 runner by less than 30 seconds and received an award for her effort.

“This race went better than expected,” Bailly said. “I was running in a different race, at a different time, in hotter weather, so I was worried. But Coach Hannah and [parent volunteer assistant Steve] Oliver kept telling me to just give it my best. I ended up getting a minute personal record. I guess I finally convinced myself to clear my head and just run.”

There were a total of six runners in the varsity race, and another six running junior varsity, which collected a total of 167 points. The varsity squad had 265 points.

Now, it’s back to practice for the team.

“Roster spots are determined by the previous race,” Hannah said. “We will be hitting the workouts harder this week by adding another speed/hill session on Saturday and keeping mileage up before heading into [Cape Coast Conference]. Everyone that wants to improve this week should focus on pushing the pace in their groups and hopefully that will carry over into race day.”

The Cape Coast Conference meet is scheduled to be held at Wickham Park on Oct. 17.