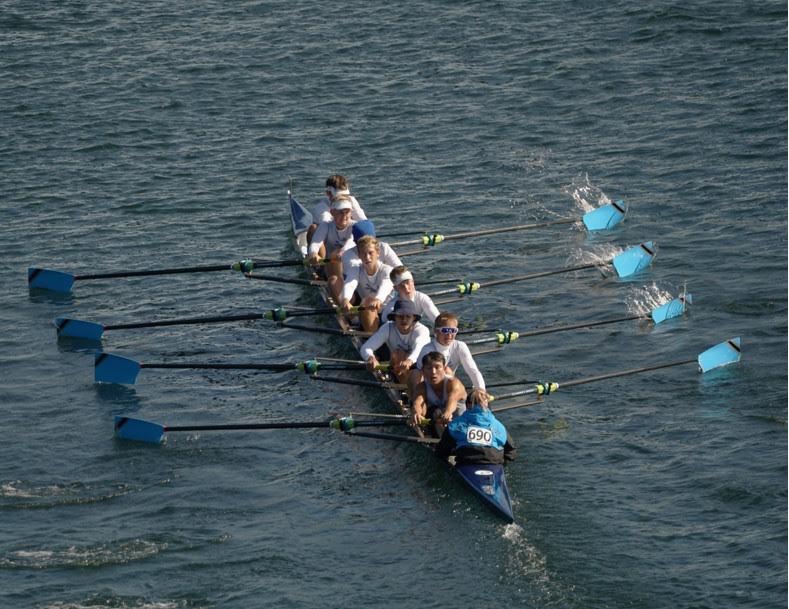 As junior Anastacia Devlin and her teammates reflected on the end of the 2019-2020 season, they realized that Space Coast Crew had just gone through a dramatic change. At the end of last year’s season, more than a quarter of the high school crew team graduated, leaving behind their capable leadership and strong contribution to team performance.

“[The team] honestly feels a lot smaller, especially because it’s my fourth year on the team,” Devlin said. “And a couple of the guys that graduated last year were on the team the same year that I joined. It just feels really small when I think about all of the people that left.”

21 out of 78 high school rowers graduated and left SCC at the end of the 2019-2020 season, and the club is now learning to adjust to a different team demographic.

“We lost a [quarter] of our team, but then ironically we got a [quarter] of a team that joined in from the eighth-graders coming up as freshmen,” said Bryan Little, director of rowing and head coach at SCC. “Really we’ve flexed from being a really mature team to a more novice team, a younger team. It’s got its pros and its cons, but I wouldn’t say we’re rebuilding. I would just say we’re reloaded.”

Little said he believes SCC is lucky to have freshmen come fill the spots of the recently-graduated seniors.

“I mean if we were rebuilding instead of reloading it would be [much more] different,” he said. “If we had lost 20 seniors but gained 20 novices, or brand new kids, I think it would be a whole different story, and right now we have a lot of experienced freshmen, and that’s really helping us.”

Devlin said she also believes having new, experienced freshmen on the team is an advantage.

“I love having more girls on the team, cause I just want the team to get big and get fast,” Devlin said. “There are already a couple of freshmen who are getting really strong and getting really good.”

Little said that although SCC lost many of its leaders last year, he is confident that the team will continue to find internal guidance from rowers.

“A lot of people had to step up to become team captain and basically just leaders of the team,” Derenthal said. “There’s definitely a big hole in the team, cause there were [about] 20 seniors last year [that left].”

Devlin said she became a co-captain with Riley Gilman because of how important captains are for the younger rowers.

“I kind of just realized there needs to be at least a couple girls on the team who take initiative, otherwise some stuff just won’t get done,” Devlin said. “I think that having captains is really important for the team because, especially for the newer kids, it can be a little intimidating for them to talk to the coaches. It’s good cause we want to make them feel comfortable, and if they have any questions that they are nervous to ask a coach [about], they can come to us.”

Despite the graduation of the class of 2020, Little said that he has high hopes for SCC this season.

“Every year since I’ve started with this team we’ve progressively [kept] getting better,” he said, “and the senior class right now is really stepping up too and doing their thing, and if [the team] can continue to develop in the right manner and have the right culture, we’re gonna come out of the woodworks here and just scare the state of Florida.”