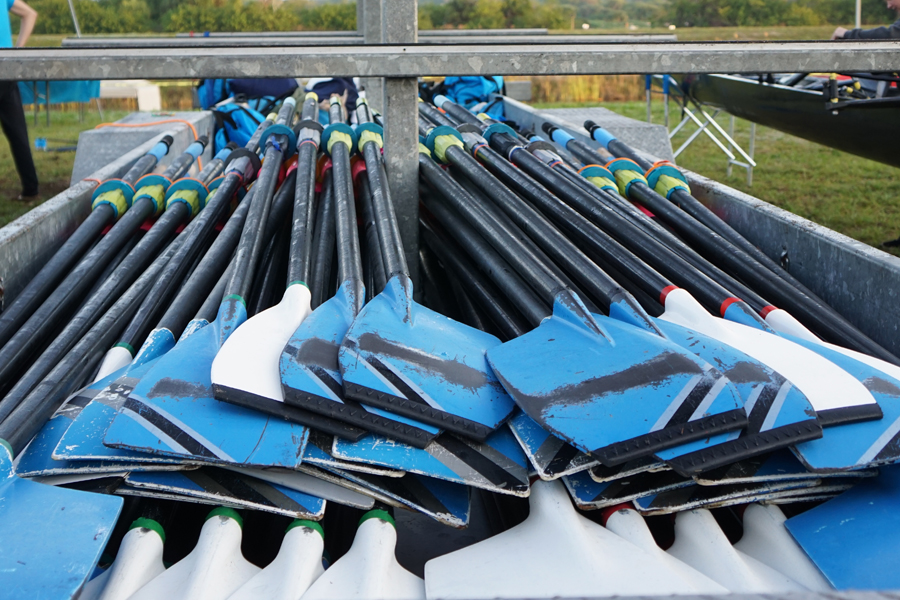 Oars used by Space Coast Crew are laid out on a trailer.

Since the start of the 2020 season at Space Coast Crew in August, coaches have been taking precautions to ensure their rowers are as safe as possible during the pandemic.

“We went through multiple steps of trying to understand about what COVID is, and how it spreads, with all the new information and all the new data that comes out,” said Brian Little, director of rowing and head coach.

“We take temperatures, we ask the questions that are normally asked by anyone: Have you been around anyone with COVID, have you had any symptoms today, are you feeling ill?” Little said. “And then we wash hands immediately after that.”

Among the procedures in place to minimize contact at practice is the separation of the men’s, women’s, and middle school teams, which the club hopes will reduce potential infections.

“When the kids arrive at practice every day they are met either by the men’s coach, if you’re on the men’s team, or by the women’s coach, if you’re on the women’s team, and then if you’re a middle-schooler by the middle-school coaches,” Little said. “The men enter through one side of the building and the women enter through the other side of the building, so we try to keep everyone separated as much as possible”

Sophomore rower Jacob Marano said he believes this is a necessary step in the right direction, but does not embrace the move with overwhelming enthusiasm.

“They are enforcing the separation of the men’s and the women’s team, and the middle-school team because that contact is not necessary,” he said, “but I feel like it makes the teams feel less like one.”

In addition, the SCC staff also sees to the social distancing of each rower while they are performing heavy exercise, during which mask-wearing is not enforced.

“Everyone is wearing a face covering, and we wear that up until the point where our athletes really start elevating their heart rate and breathing starts to become a little bit more labored, that’s when they can bring the mask down,” Little said.  “Once we get to working out, the machines are separated by six feet, and when they’re lifting they’re greater than six feet [apart]. In the boats, you know, we’re rowing [eight-seat boats] and were training in big boats right now, but we’re out in the open air. We’ve got breezes, we’ve got airflow. They’re all facing the same way except for the coxswains, who are facing them, and they’re wearing a mask.”

Little said he also tries to make sure that the rowers at SCC are mentally healthy and ready to row.

“We really reinforce the positivity every night, asking them what was positive about the day,” he said. “I get a reflection from all boats and it’s an opportunity for them to maybe take a step back and realize maybe OK, it wasn’t a perfect practice, but this went right, this went right, this went right. OK, let’s build on that tomorrow and see if we can’t make it even better. There’s a lot of anxiety and depression that comes with this, and it is stressful.”

Marano and other rowers have made adjustments in their own mindsets after the abrupt end to last year’s season due to COVID, and the extended break from being on the water, and hope to be able to push through an unprecedented season during the pandemic.

“Over the break I think a lot of athletes, including me, realized that we were taking practice for granted, and that we really needed to be showing up every day ready to work, which we weren’t doing,” he said. “I think now, after missing practice so much, people come back and realize, ‘You know what? So what, it’s hard? At least we’re still getting practice, and that’s like a blessing.’ People find a way to look past the negatives now and find the positive things.”