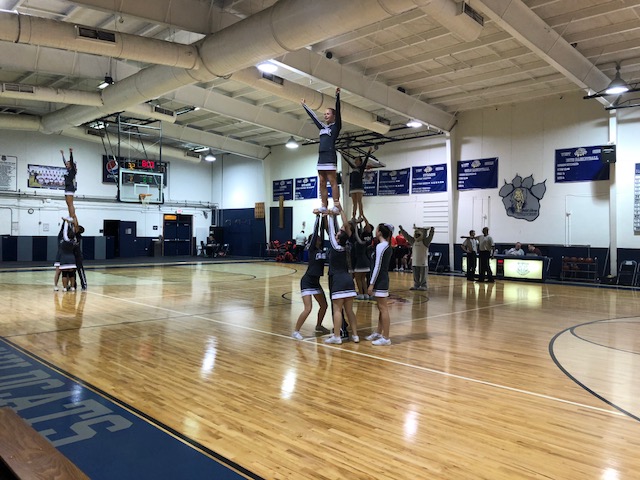 The cheer team performs at the basketball team’s final home game of the season.

The cheerleaders performed their last routine of the season Tuesday at the boys’ final home varsity basketball game against Edgewood. The Cats did their halftime routine as well as their cheers on the bench during the game.

“Cheering with the seniors for the last time really made me sad because I’ve grown so close to all of them, and I don’t know what I’d do without them,” sophomore Sophia Pliego said. “Next year will be very different because I’m so used to being with them all the time and not hearing them yell at us will be sad and weird.”

“I was extremely happy with our performance! Our stunts were clean and everyone really gave it their all during the dance so I think it was one of best,” said Jones, who also gave a piece of advice for next year.

“I’d like to tell the team for next season to keep working hard,” she said. “Remember to always have fun in what you’re doing because it’s over before you know it.”