Cats get blown out by Tigers 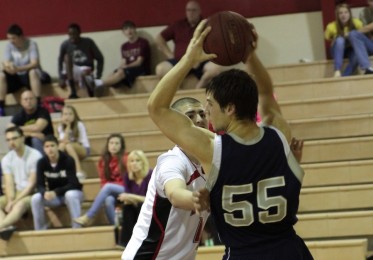 Despite the efforts of the Cats’ bigs, the boys’ varsity basketball team fell to division rivals Cocoa for the second time this season, 74-49.

Despite the team’s poor performance in their blowout loss against the Tigers, coach Tony Riopelle was happy with the improvement of his team.

“Even though we are not winning a whole lot of games right now, we are playing a whole lot better than earlier in the season.  Last night we lost 74-49, but that is an improvement from the first time we played Cocoa,” Riopelle said.

Forward Shane Potter attributed the Wildcats’ loss to the lack of fundamental play and explained what the boys needed to improve on for their next game.

“We need to make more shots and get more rebounds,” Potter said.  “It all falls back to the fundamentals.  Fundamentals, fundamentals.  Now a days, everyone is worried about the flash, I’m guilty of it too, but we just need to worry about getting buckets.”

With their season record continuing to fall, now dropping to 5-16, the Cats hope to win at home against school rivals Edgewood.  The game will be played at West Shore and will start at 7 p.m.