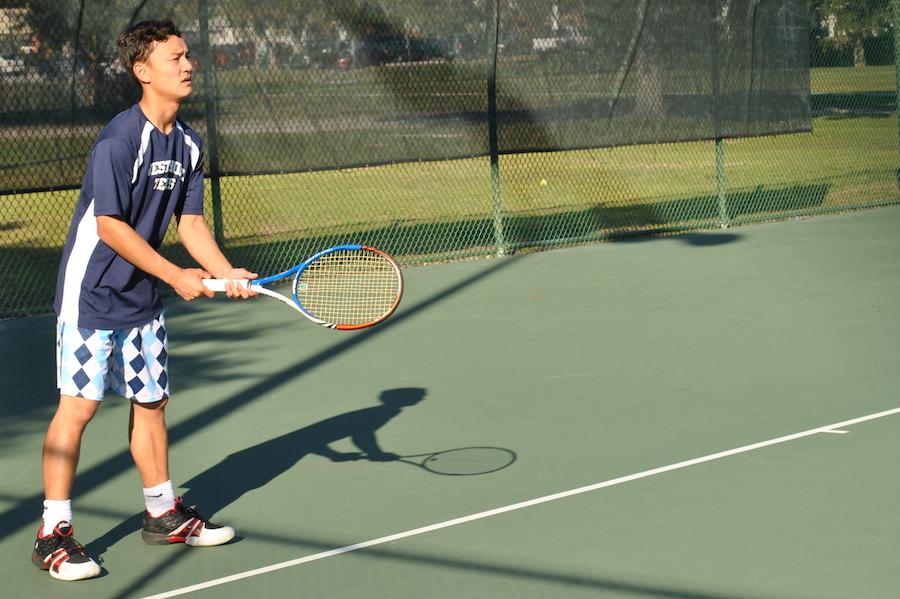 Junior Kha Duong waits to return a serve during a match against Melbourne High on Wednesday,

Despite junior Ben Mechachonis outlasting his opponent in a three-hour marathon match and finishing the season with just one singles loss, the boys’ tennis team was unable to rally from an early deficit and fell Monday to the Sun Coast Community High School Chargers 6-1.

“They were athletic, but the match could easily have been 4-3,” Mechachonis said. “We’ve had trouble closing, and when you win the first set and are up by three games in the second, we need those wins. That didn’t happen yesterday.”

“They were a lot faster than us for a lot of the time,” Mechachonis said. “They weren’t some unbeatable, incredible team, but they had the upper hand yesterday.”

For senior Erich Heinricher, the match marked the final in his illustrious career that saw him advance to the state semifinals his junior year, and lead his team to a 13-1 regular season record in his final year.

“He’s been our best player for four years,” Mechachonis said. “You can’t replace that easily. He always took the number one spots and allowed us to play to our strengths. It’s gonna be a lot harder without him next year.

Despite the team’s loss, the season was one of unprecedented success, as the Wildcats found themselves atop the district for much of the year before falling to Merritt Island in the district finals.

“It’s been a great year,” Mechachonis said. “I thought we could get to states, but we’ll be back next year.”