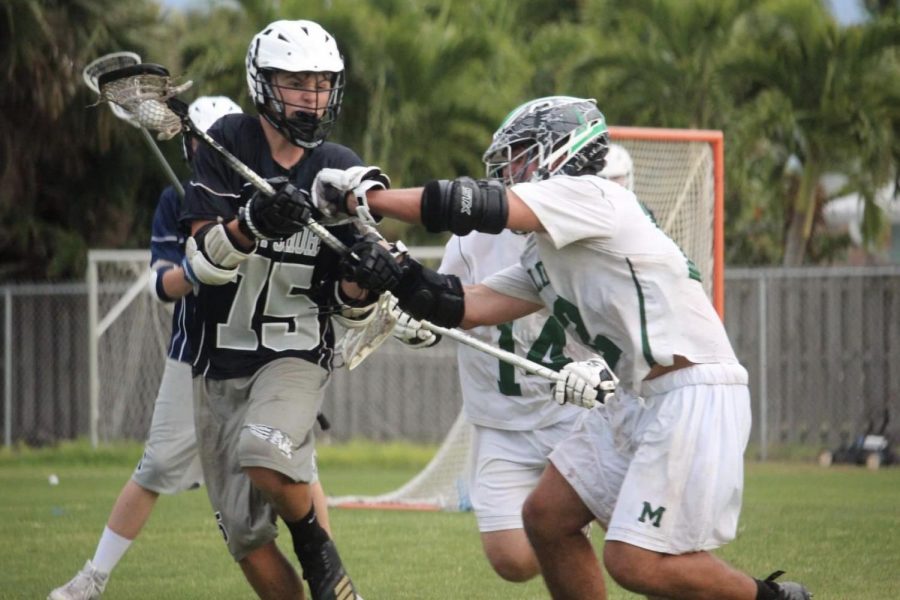 The game was played at Gemini Elementary School, instead of at Melbourne High School, as its turf field is not in playable condition. Zach called the venue change a good thing.

“It was kind of cool to play at Gemini,” he said. “It was a good environment because fans were sitting close to the field, so it felt like a competitive travel game. And Gemini is my old school, so it was a throwback.”

Although junior goalie Kyle Johnson had 15 saves, he said that playing at Gemini seemed more difficult to him.

“We played a lot earlier than we are used to, so the sun posed a challenge,” he said. “It was also wet, so we had some trouble running the ball down the field.”

The victory marks the second consecutive year the boys’ lacrosse team has made it to districts. Four teams enter the playoffs in each district, with the No. 1 and No. 4 teams and the No. 2 and No. 3 teams playing each other. Only one team will advance to regionals.

“Last year, we got clapped by MCC,” Zach said. “We were number four in the district, and MCC is really good, so we weren’t really expecting to win. We wanted to, but we knew it’d be a hard game.”

“We will definitely try our best in the playoffs,” Johnson said. “Hopefully, we can break the first round and play for the district title, but I think this year, just getting to the playoffs is good for us. Next year, we will really focus on winning it all.”