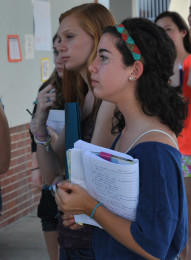 “Different cultures gain different things,” senior Kayley Lew said. “For example, the paw prints on the side of the building represent our school culture. We also looked at sequence occupancy. It’s like building new cultures on top of old ones. For example, there’s a plaque by the front office that says ‘Eau Gallie Junior High.’ Ms. O.T. showed that we built our West Shore culture on top of an old culture.”

The class also learned of the existence of a time capsule buried on campus in the early 1970s when the campus was home to Central Junior High School. The whereabouts of the time capsule has been forgotten.